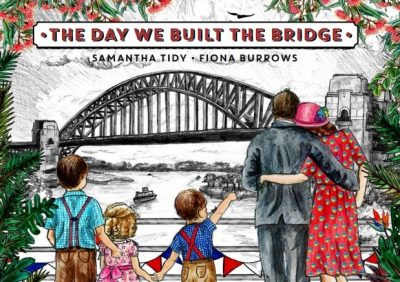 The Day We Built the Bridge (Samantha Tidy, illus by Fiona Burrows, MidnightSun)

Samantha Tidy and Fiona Burrows take the creation of a national icon, the Sydney Harbour Bridge, and strip it back to a streamlined, succinct story of a need, an idea in 1890, and ultimately, in 1932, a reality. From the bridge’s conception to completion (taking in a war, a depression, and years of labour), the story is one of hopes, dreams, stamina, and celebration, but is told in concise statements. A subtle nonverbal sub-story (reminiscent of Jeannie Baker’s Belonging and Window) sees the protagonist grow from toddler to father as he witnesses the bridge’s history. In the final illustration—a visual epilogue—the man, now slippered and grey-haired, reads this very book to a group of children. Dark, chunky charcoal landscapes and figures dominate the illustrations, with well-chosen highlights of colour: balloons; poppies; hats; native flora; posters and advertising of the era; boats in the harbour; and the protagonist’s trademark red socks. Suitable for middle to upper primary-aged readers, the book leans towards a patriotic, sentimental exercise in myth-making, but avoids going too far in this direction. In simplifying this story for a young audience, Tidy unfortunately loses some of the extraordinary technical achievement that is the bridge, but succeeds in re-creating its construction as a social history with a warm, human side.

Anica Boulanger-Mashberg, an editor and writer, is a bookseller at The Hobart Bookshop