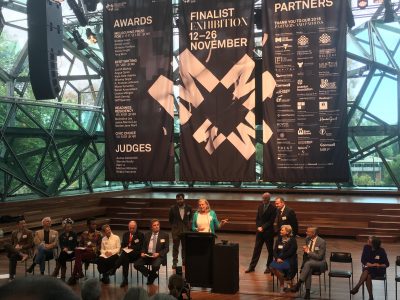 Children’s author and illustrator Alison Lester has won the 2018 Melbourne Prize for Literature, presented every three years to a Victorian author ‘whose body of published work has made an outstanding contribution to Australian literature, as well as to cultural and intellectual life’.

Lester was presented with the $60,000 award at a ceremony at Federation Square in Melbourne on 14 November. She was one of five authors shortlisted for the award, along with Tony Birch, Gideon Haigh, Christos Tsiolkas and Alexis Wright.

The prize judges described Lester as ‘a national treasure’, adding that ‘there’s hardly an Australian who has not read her work’. The judges said in a statement: ‘For more than 30 years, through an extraordinarily rich output, writer and illustrator Alison Lester has provided children in Australia and overseas with books that delight, educate and inculcate a love of reading. Her ongoing contribution to Australian literary life has been extended through her work with children in remote Indigenous communities and the Royal Children’s Hospital.’

Maria Tumarkin, who was chosen from a shortlist of 10 Victorian authors, was awarded the $30,000 Best Writing Award, presented for ‘a work, published between 2015 and 2018, of outstanding clarity, originality and creativity’ for her book of essays Axiomatic (Brow Books). The judges praised Axiomatic as a ‘highly original work of creative nonfiction’ that ‘challenges the reader at the same time that it enlightens’.

Each of the finalists across all categories is eligible for the $4000 Civic Choice Award, which will be voted on by members of the public until 26 November.

The announcement of the winners coincided with the opening of an exhibition of all the finalists’ work at Federation Square, which will run until 26 November.

Now in its 14th year, this is the fifth time the Melbourne Prize for Literature has been presented, with the prize alternating between urban sculpture, music and literature in a three-year cycle. To learn more about the Melbourne Prize, visit the website.