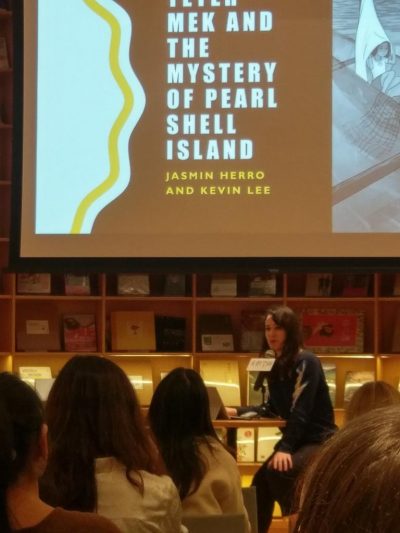 From the customs queue at the airport to the hotels in town, Shanghai was packed with people for the China International Import and Export Expo (CIIE), which happened to be running at the same time as the China Shanghai International Children’s Book Fair (CCBF) in early November. The streets were lined with planters, and flowers bloomed alongside Jinbao, the ever-present smiling panda who is the mascot for the CIIE.

I was part of the Shanghai Visiting International Publishers fellowship, along with peers from the UK, Europe, Rwanda and Asia, for a six-day program of publisher and bookstore visits and time at the fair itself. What makes these programs invaluable, aside from getting to know the other fellows and building networks, is gaining an understanding of a market that can be difficult to read. My last visit to China was nearly four years ago and much of what I learned then is outdated already.

The CCBF is relatively modest in size—compared with Bologna Children’s Book Fair, for instance—but it is just the beginning for this emerging market. In a country where 20 million babies are born in a year and there are around 3000 bookshops in Shanghai alone, children’s book publishing is booming—and there’s room for growth. According to Chicken House Books publisher and managing director Barry Cunningham, if you compare China with more established markets, the current children’s book share (24%) will need to increase significantly if it is to match the 37% share in the US and UK. In Australia, children’s book sales represent almost half of the overall market (44% of all volume sales), according to Nielsen BookScan.

From canvassing the publishers we visited, we discovered that while the market has exploded, the average print run for many titles is 8000 copies, and given the expense of translation, the relatively low unit price and the costs of promotion, there remain barriers to entry. Nevertheless, while I was on the Australia Council for the Arts Australian booth, I encountered many roving junior rights coordinators and editors, new to their jobs and keen to buy up rights—a mid-sized publisher in this market could release 800-1500 titles per year, which means there’s a huge demand for content.

Hsin-Yi, a picture book publisher from Taiwan that has published both bestsellers and award-winners, described the way they combine parent education and charitable works with their business. Since the publishing of Western-style picture books has only been part of the publishing culture for around a decade, learning how to read these books has been the focus of education and training campaigns for parents and grandparents. In another kind of vertical integration, China Welfare Institute Publishing House, a government-owned, Shanghai-based publisher, has a kindergarten in its publishing offices and runs events for local children to celebrate the publication of their books.

Chinese bookselling is different from Australian bookselling in a few key ways. One striking superficial example is that books are shrink-wrapped before they’re delivered to bricks-and-mortar stores, so either a sample copy is available on display or the customer needs to ask the staff to open the book for them. Bookstores are often a desirable addition to shopping centres that are competing to attract China’s growing middle classes and in all of the stores we visited there were significant numbers of people sitting on the floor using the store as a kind of library.

When it comes to the online space, there is a channel available to Chinese booksellers and publishers alike that is as yet non-existent in our market: social media retailing. Companies can have business accounts on WeChat—the Chinese app that’s like Facebook, a banking app and eBay all rolled into one—from which they can sell directly. This has proved hugely popular with parents ordering books for their children and it’s also a way of managing parent education and development, since groups on WeChat cover activities from how to read and what to read to celebrity recommendations.

At the fair itself, as with any fair around the world, agents, editors and rights managers hunched over catalogues, tablets and physical books, eager for deals and the next big thing (what comes after unicorns?). It’s an extraordinary opportunity for children’s book publishing and, if all the auguries are true, will continue to expand exponentially for some years to come.