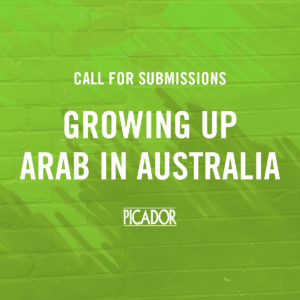 Saleh, Abdel-Fattah to edit anthology about growing up Arab in Australia

Picador has announced it will publish a new anthology in 2019 about growing up Arab in Australia, to be co-edited by activist and poet Sara Saleh, and author and academic Randa Abdel-Fattah.

Picador is currently seeking first-person submissions ‘about growing up as a member of the Arab diaspora in Australia’, with the publisher adding that poetry that ‘speaks strongly to the aim of the anthology’ may also be considered. ‘Above all, we want to smash the stereotypes about our community that too often proliferate in the mainstream media,’ said the publisher in a statement.

Saleh and Abdel-Fattah also emphasised that the anthology aims to question mainstream narratives around the Arab Australian experience. ‘Where does our identity take root, in or beyond the local, linguistic, familial, faith, tribal, national affiliations? Which borders are we bound by, and which ones have we broken or keep breaking? We are in an ongoing questioning, conversation and exploration of how we stake a claim to ourselves when we are constantly classed, raced, gendered,’ said the pair in a statement.

‘Representation is a “crucial location of struggle”, and we are looking for this in the intersections, the fractures, the complexities, the contradictions of our multiple identities. This is our moment to transcend the dominant constructs and come together to produce something that shows the collective strength of our divergent voices.’

The co-editors said that the call-out for the anthology is ‘an open invitation for writers from all walks of Australian-Arab life to offer their own narratives, to highlight their ongoing attempts at carving a sense of self in a space whose parameters are already seemingly set for them—whether by their own community, the white gaze or by the “mainstream”.’