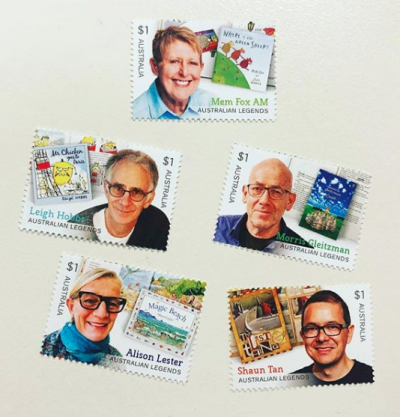 Australia Post is honouring five children’s authors on its ‘Australian legends of children’s literature’ postage stamp series, as part of its 2019 Legends Awards.

Authors and their books featured in the series are:

In its 23rd year, the Australia Post Legends Award celebrates living Australians who have made a unique contribution to the nation through their field of endeavour.

Australia Post executive general manager for community and consumer Nicole Sheffield said: ‘These authors hold a very special place in the bookshelves of many Australian families, and we’re excited to celebrate their achievements with this new stamp release.’

On the first day of issue, the authors were presented with a 24-carat-gold replica of the stamp on which they are represented. The 2019 Australia Post Legends will also be honoured at official Australia Day council events hosted in Melbourne and Sydney. Australia Post is selling various postage products related to the series, as well as a range of books by the authors.