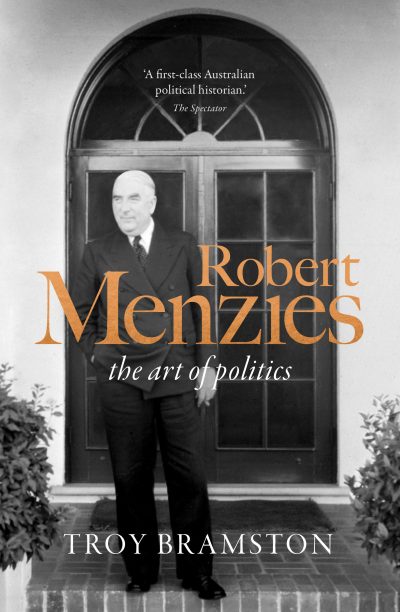 Journalist and former political advisor Troy Bramston’s new biography of Robert Menzies, Australia’s longest serving prime minister, aims to refocus the historical lens. Too often Menzies is written off as an antediluvian character, hopelessly devoted to Queen and Empire, while his ardent supporters keep him on an unrealistic pedestal. Using newly released material and a broad range of author interviews with friends, family and colleagues, Bramston draws a portrait of a brilliant yet flawed man. Menzies’ best quality was his ability for personal reflection and change. After the crushing failure of his first prime ministership (1939-1941) he managed to reinvent himself and create a new political force, the Australian Liberal Party. Philosophically gifted, he fashioned an appealing narrative of progressive values based on the rights of the individual. There were also serious missteps: his support in 1938 for Hitler’s Germany, his attitudes towards race, a lax attitude towards apartheid, allowing the testing of nuclear bombs on Australian soil, and volunteering our troops for the Vietnam war. Robert Menzies: The Art of Politics is always judicious and balanced, providing a multifaceted portrait of a key figure of Australian history. This is essential reading for students of politics and history, or anyone interested in the Liberal Party and its deep national influence.