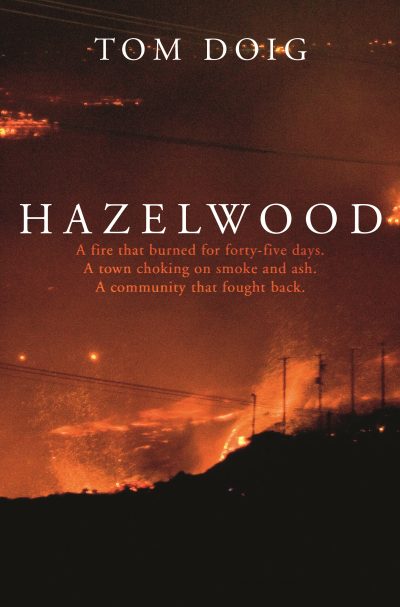 During a heatwave in February 2014, brown coal ignites within Hazelwood Power Station’s open-pit mine, causing a fire that burns for 45 days and sends toxic plumes of smoke over the town of Morwell in Victoria’s Latrobe Valley. Reassured by the multinational energy company that owns Hazelwood that nothing is wrong, the media ignores the fire for weeks. While excavators dig out burning coals from the mine’s hellscape, small particles escape and enter the lungs of Morwell’s residents. Eleven people—probably more—die as a direct result of the pollution. In Hazelwood, Tom Doig paints a vivid picture of the local reaction to the disaster, and the scenes in which residents suddenly die are particularly shocking. The gripping narrative plays out like a true-crime thriller. Doig deftly weaves into the narrative the history of coal production in the Latrobe Valley and how the privatisation of the power station led to job losses, region-wide poverty and the neglect of safety precautions. An expansion of Doig’s Penguin Special Coal Face, this book sheds more light on an event that continues to be played down. A perfect companion to Chloe Hooper’s The Arsonist, which covers the bushfires in nearby Churchill five years earlier, Hazelwood is a compelling and urgent account of events that all Victorians should be—but aren’t—familiar with.

Andrew Wrathall, former production manager of Books+Publishing, grew up in the Latrobe Valley.

Editor’s note: Hazelwood was scheduled for May 2019 release, and this review originally appeared in issue 1, 2019 of Books+Publishing magazine. Due to a suppression order involving the legal proceedings around the Hazelwood Mine Fire Inquiry, the review was removed from the B+P website and the book’s publication date was pushed back. The inquiry has since concluded and Hazelwood is now available.