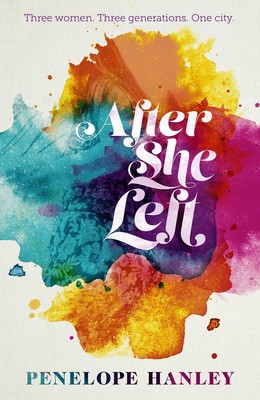 After She Left (Penelope Hanley, Ventura)

After She Left is an exploration of feminism in relation to the arts, domestic life and the cultural ramifications of non-traditional motherhood. It spans six decades and the lives of three women—mother, daughter and granddaughter—and how they move through the world in relation to one another. The novel plays with the idea of an explosive secret in the form of concealed illegitimacy and a rape that results in pregnancy. However, the reader and the majority of the characters have this information for almost the whole novel, and the focus is on character exploration and interplay, which is Penelope Hanley’s strong suit. All three women are fully drawn and the range of supporting characters is well-realised. Sydney from the 1920s to the 1970s is vividly depicted and it’s clear that Hanley knows these people and the eras within which she’s working well. Slightly less successful is the political mouth-piecing: Hanley spends time explaining feminism and the politics of the Whitlam government, which in 2019 seems unnecessary, particularly in a novel that best appeals to women interested in historical character studies. However, this is a minor quibble as it is immensely enjoyable to read about the sudden political liberation of a 1950s Catholic housewife.

Under the Rainbow: The life and times of E W Cole (Richard Broinowski, MUP)  Nonfiction