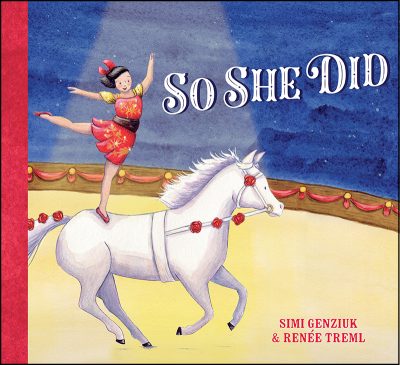 So She Did: The Story of May Wirth (Simi Genziuk, illus by Renée Treml, Affirm)

Born in Bundaberg in 1984, May Wirth showed an unusual knack for acrobatics at an early age. So much so that she was adopted by an equestrienne from the famous circus family, the Wirths, and quickly became a circus rider. After perfecting forward somersaulting on a cantering horse, she was spotted by Barnum & Bailey’s Circus, and eventually became the first woman to achieve backwards somersaulting from one horse to another. She suffered an accident, but was able to return to the circus, and was known as the greatest bareback rider of all time. Simi Genziuk has written this story with a very light touch. May Wirth’s achievements are emphasised and her adversities are mentioned, but not dwelt on. The repeated use of the refrain ‘So she did’ contributes to the text and the language is both simple and direct, making this a suitable book for quite a young audience. Renée Treml’s slightly static illustrations are also very age-appropriate and are suitably bright and colourful for the subject matter. Suited to readers aged 4–8, this is a fun and interesting addition to the ‘girls can do it’ genre that is burgeoning at the moment.