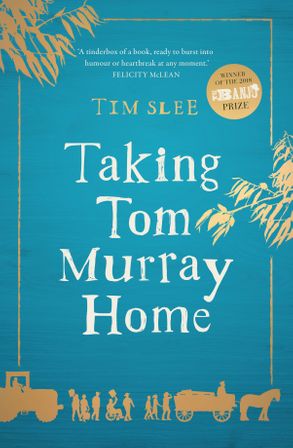 This debut novel and winner of HarperCollins’ Banjo Prize is based on the ingenious premise of a funeral-protest that raises awareness of the pressures facing dairy farmers from banks, supermarkets and the cult of cheap milk. After Tom Murray accidentally kills himself burning his farmhouse down to prevent the bank from getting it, his wife, Dawn, decides to take his body via horse and cart on a five-day journey to Melbourne. Along the way, the entourage attracts wanted and unwanted attention, a colourful medley of characters and a sizeable hashtag following. Tom’s twin children, Jack and Jenny, are united by the belief their dad is still alive and their analgesia, an inability to feel pain. Narrative tension increases as the journey progresses, with the police trying to stop it, the media fuelling it and a mystery following it. Tim Slee celebrates Australia’s rebel spirit with references to Henry Lawson and Ned Kelly, and unearths the stoicism, perseverance and humour of our rural character. Easily readable, highly entertaining and destined for the screen, this book should have broad appeal. It typifies a true Australian yarn but points to more serious problems in society, especially the issues facing those on the land.