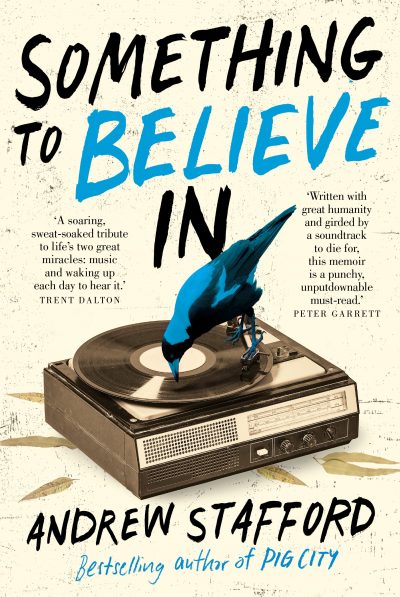 Something to Believe In (Andrew Stafford, UQP)

This memoir is rock journalist Andrew Stafford’s first book since his 2004 milestone Pig City, which mapped Brisbane music ‘from the Saints to Savage Garden’. Named after a Ramones song, Something to Believe In mines the ripe intersection of Stafford’s personal trials and pop culture passions, with enthusiastic tributes to his most formative songs and albums along the way. Stafford is exceptionally frank, opening the book with a scene of him mulling over a suicide attempt, and he details divorce and loss just as openly. Thankfully he has music to get him through, evangelising for underdogs like Spencer P Jones and curating painstaking playlists to match the book’s narrative arc. Stafford balances his canonised favourites (with Television’s Marquee Moon right at the top) with self-effacing accounts of checking into psych wards, driving taxis to supplement his writing income and accompanying cult Brisbane rockers Hits on a wild European tour. Fans of Rob Sheffield’s 2007 music memoir Love is a Mix Tape should appreciate the propulsive blend of fandom and autobiography, and the book reinforces Stafford’s impactful, accessible way of describing the music he loves (or hates).