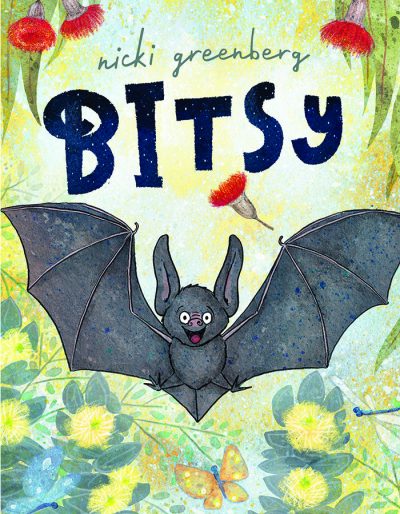 We all know that bats are nocturnal creatures, but writer/illustrator Nicki Greenberg’s latest picture book takes this fact and subverts it: her bat, Bitsy, dares to behave differently from its peers. In simple rhymes (‘Bitsy was restless/Bitsy was brave/Bitsy was bored/hanging out in the cave’) the book follows her attempts to explore beyond the cover of night. There is humour throughout; Bitsy’s colleagues think she is ‘batty’ and will be prey to the ‘day-beasts’, but Bitsy’s sense of adventure remains unchallenged. Greenberg has a lot of fun with her pictures; away from the gloom of the cave, Bitsy becomes enamoured of the glorious colours of day, particularly of the flowers that await her (even if they make her sneeze). She finds a friend to play with but also has less-than-friendly encounters, such as being attacked with gumnuts by frightened porcupines. Aimed at preschoolers to early primary audiences, this is an effective tool for adults to discuss the prejudices faced by individuals due to their appearance (bats are usually considered scary and not cuddly at all). Bitsy is a book about making friends and accepting differences as much as it’s about risk-taking and joie de vivre.