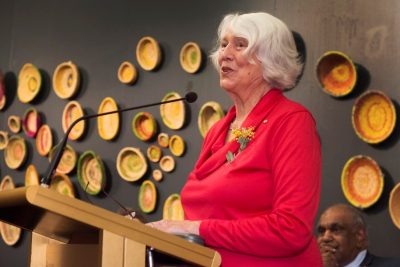 ‘Her passing is truly the end of an era … Her books confronted some of the most pressing ideas and issues of our time—conservation issues, Aboriginal social justice and the plight of refugees—well before such themes became widely explored in children’s literature, and during times when they were actively considered to be unsuitable or not of interest to a child audience … Christobel devoted her writing life to promoting peace between people, social justice and international understanding and was an ardent conservationist and social activist. She was fierce and fearless, dogged and exacting, complex and big-hearted, and an inspirational mentor and friend to all of us who worked with her.’

‘IBBY Australia laments the loss of Christobel Mattingley, an inspiring writer who has, since publishing her first book, The Picnic Dog (1970) always evinced a passionate commitment to subtly articulating and provoking debate via the prism of artfully constructed language. She was a ‘groundbreaker’ in the field of Australian children’s literature long before the term was used widely. She was considered a pioneer in writing for junior readers. Her work was also underpinned by an ardent commitment to social justice and conservation issues. IBBY Australia nominated Christobel Mattingley for the Hans Christian Andersen Award for Writing 2012 in recognition of her many acclaimed works for children. She was a stately and gracious woman of deep convictions imbued with both an intense intellectual curiosity and boundless empathy. The Australian children’s literature community is greatly diminished by her passing.’

‘I had the good fortune to know Christobel first as an assignment topic at teachers’ college in the early 80s, then as an author to be reviewed and critiqued in the late 80s, then as a speaker at Text Marks the Spot, the then Biennial La Trobe University Children’s Literature Conference, and finally as a mentor and friend. We awarded her the Pheme Tanner Award in recognition for her services to Children’s Literature. It is a cliché to say she will live on through her books, but she will. Her ways of exploring difficult issues, never ducking the pain involved, shines through in her characters and settings. She has left us wisdom, and new ways of thinking as we learn to live without the anticipation of her next book.’

‘Penguin Random House was saddened to hear of Christobel Mattingley’s passing. Christobel brought so much delight to young readers and we are so proud to have collaborated with her on a number of wonderful books including among many award-winning books, No Gun for Asmir, which received a High Commendation in the Australian Human Rights Awards in 1994. Our sympathy goes to her family at this time and her many readers over the years.’

‘Working with Christobel was always wonderful—intense, funny and interesting. I remember editing Battle Order 204 and hearing Christobel and David on the phone together, carefully discussing specific word choices. And travelling with Christobel to Oak Valley to work on the Maralinga book and seeing her energy, purpose and clarity in action, bringing people together and making lasting change. Her warmth and care made her much-loved, as well as much-respected.’

‘The first book I illustrated was Christobel’s text Black Dog (1979). However, my enduring memory of Christobel was driving her to Yalata and Oak Valley in 2008. The image of arriving in community on a hot, gusty day, and watching Christobel sit with two older ladies and then a gathering group will stay with me forever.’

‘Christobel cut a striking figure: tall, often wearing bright colours, she had strong wavy white hair and a warm sparkling smile. She was gracious, but never in a stuffy way. She was generous. I illustrated The Big Swim, Brave with Ben and then No Gun for Asmir which she wrote in Vienna, on the edge of her bed, standing up, because she had shingles and it was the only comfortable position. The royalties from the book went to Asmir’s education. She was a mentor to me and an example to us all.’

‘Here’s a last thought to contemplate from Christobel herself, from 1986:

‘If we can begin with peace in our hearts, it will spread in ever growing circles, through our families, our friends, our schools and workplaces. It will spread into the wider world through time—tomorrow and tomorrow and all the tomorrows which are the inheritance of the children we love and serve—world without end.’