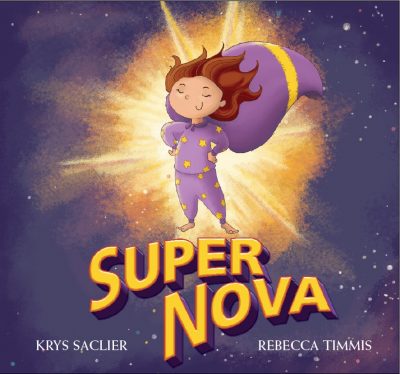 Super Nova is the story of the protagonist and his sister Nova, who he believes is getting up to all sorts of mischief. ‘Nova always gets away with it,’ says her brother. He decides to catch her out. Super Nova at first appears to be just about sibling rivalry, with Nova’s brother trying to catch her naughtiness. It turns into much more, however, with Nova using stolen items to build a rocket in the backyard. Suddenly, there are aliens in the backyard that Nova has to fight off. While the story is somewhat about empowering girls and encouraging their interest in science, Nova’s brother takes up much of the story and the spreads. It’s enjoyable, though, to see Nova’s brother scared of the aliens, and ultimately the siblings come together, with Nova’s brother taking the blame when their mother catches them outside late at night. Super Nova does indeed offer girls an alternative, science-based story, but this could have been enhanced by focusing solely on the title character. Timmis’ illustrations are bright and homely, featuring clever foreshadowing of the aliens’ appearance as well as recognisable parts of home life: family photos, a tablet device for recipes, a ‘Private—Keep Out’ sign on the older brother’s door, and mess scattered about. Recommended for children aged four and up.

Clare Millar is a bookseller, writer and editor

The Boy From the Mish (Gary Lonesborough, A&U)  Young adult

Coming of Age in the War on Terror (Randa Abdel-Fattah, NewSouth)  Nonfiction