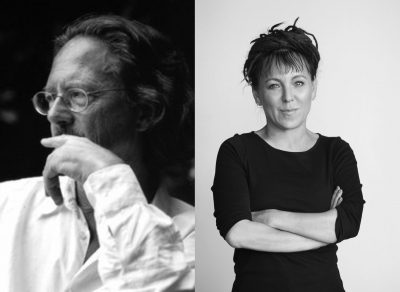 Tokarczuk received the 2018 prize ‘for a narrative imagination that with encyclopedic passion represents the crossing of boundaries as a form of life’. The English translation of her 2007 novel Flights (trans by Jennifer Croft, Text) was awarded the 2018 Man Booker International Prize, and the English translation of her 2009 novel Drive Your Plow Over the Bones of the Dead (trans by Antonia Lloyd-Jones, Text) was longlisted for the 2019 National Book Award for translated literature. She has written 12 novels in Polish, beginning with her 1993 debut, Podróż ludzi Księgi (The Journey of the Book-People).

Handke was awarded the 2019 prize for ‘an influential work that with linguistic ingenuity has explored the periphery and the specificity of human experience’, according to the Swedish Academy. He published his first novel, Die Hornissen (The Hornets), in 1966 and is known for his 1970 novel Die Angst des Tormanns beim Elfmeter (The Goalie’s Anxiety at the Penalty Kick). Handke also wrote the screenplay for Wim Wenders’ 1987 film Wings of Desire. A controversial figure, Handke spoke at the 2006 funeral of former Serbian president Slobodan Milošević and expressed sympathy for Serbia during the Balkan wars.

Handke’s win has been met with anger from a number of groups, including PEN America, which released a statement saying the organisation is ‘dumbfounded by the selection of a writer who has used his public voice to undercut historical truth and offer public succor to perpetrators of genocide’. According to the Guardian, the Nobel committee acknowledged that Handke ‘has, at times, caused controversy’ but added that ‘he cannot be considered an engaged writer in the sense of Sartre, and he gives us no political programs’.

The Nobel Prize in Literature was previously awarded to Kazuo Ishiguro in 2017.