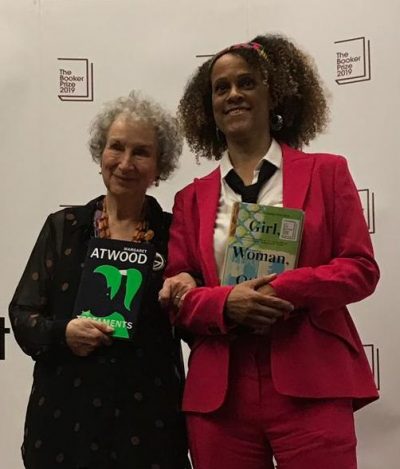 The 2019 Booker Prize has been jointly awarded to Bernadine Evaristo for Girl, Woman, Other (Hamish Hamilton) and Margaret Atwood for The Testaments (Chatto & Windus). It is the third time in the prize’s 50-year history that two books have won.

After Michael Ondaatje and Barry Unsworth were jointly awarded the prize in 1992, the rules were changed so that only one author could win. The 2019 judges deliberated for five hours, eventually deciding to break the rule so that this year’s prize could be awarded to two writers. Evaristo and Atwood will split the £50,000 (A$93,000) prize money.

London-based Evaristo is the first black woman to win the Booker. Girl, Woman, Other is her eighth novel and is told in the voice of 12 different characters, who are mostly black British women.

‘With a dazzling rhythm, Evaristo takes us on a journey of intergenerational stories, moving through different spaces and heritages: African, Caribbean, European,’ the judges said. ‘Her style is passionate, razor-sharp, brimming with energy and humour. There is never a single moment of dullness in this book and the pace does not allow you to turn away from its momentum. The language wraps the reader by force, with the quality of oral traditions and poetry.’

Toronto-based Atwood is, at 79 years old, the oldest person to win the prize. She was previously awarded the Booker in 2000 for The Blind Assassin, and was shortlisted for her novels The Handmaid’s Tale, Cat’s Eye, Alias Grace and Oryx and Crake. The Testaments is her highly anticipated sequel to 1986’s feminist dystopia The Handmaid’s Tale and is set 15 years after the events of the first novel.

The judges said: ‘It is a savage and beautiful novel that speaks to us today with conviction and power. The bar is set unusually high for Atwood. She soars.’

The winners were chosen from a shortlist of six novels, including the latest novel by previous Booker Prize-winner Salman Rushdie. Literary director of the Booker Prize Foundation Gaby Wood said: ‘[The judges] were not so much divided as unwilling to jettison any more when they finally got down to two, and asked if they might split the prize between them. On being told that it was definitively against the rules, the judges held a further discussion and chose to flout them.’