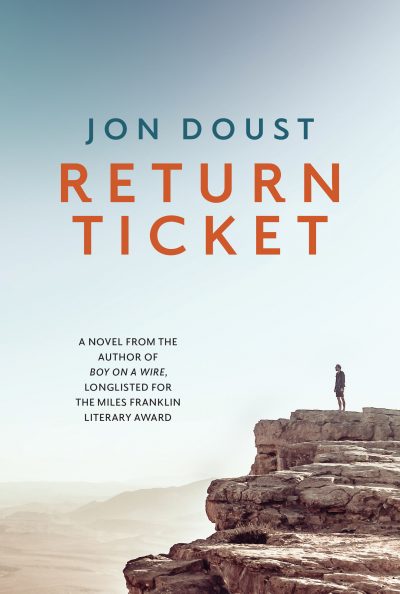 Jon Doust has now devoted three books to wilful, semi-autobiographical protagonist Jack Muir. While 2009’s Boy on a Wire and 2012’s To the Highlands saw Jack fumbling towards manhood, Return Ticket alternates between the character’s globetrotting adulthood in the 70s and his more reflective later life in 2018. Told in short episodes resembling diary entries, the story flows easily, subtly swapping between first- and second-person narration. There are recurring narrative threads, like Jack’s odd passion for washing dishes and the hard-nosed wife he meets on an Israeli kibbutz, but for the most part the book unfolds like a loose and likeable travelogue. ‘The young Muir’ dabbles in LSD and other drugs in South Africa, falls into uni study in Perth and encounters plenty of cultural clashes while playing the ubiquitous Aussie abroad. Through it all, Doust flexes a remarkably matter-of-fact delivery: ‘He was as happy as a man could expect given he’d gone through a relationship collapse, the tail end of a war, a couple of beatings, car accidents and another period of depression.’ Against that ever-shifting backdrop of war—and more intimate turmoil—Jack soaks up enough bracing experience for many lifetimes over, and it’s to Doust’s credit that it all rings true.