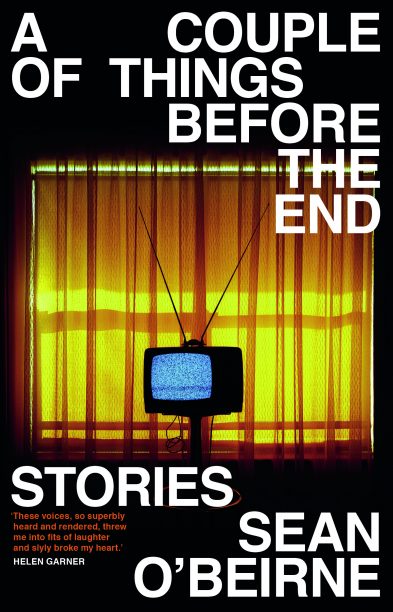 A Couple of Things Before the End: Stories (Sean O’Beirne, Black Inc.)

The stories in this debut collection from Melbourne writer Sean O’Beirne are written as fictional, often funny monologues, letters, speeches, interviews, texts and emails, diary entries, official reports and online comments. They are told through distinctive Australian voices, on the page in all their hesitancies and uncertainties. These voices recount early life experiences, text their siblings and give public speeches. We read an apology for a newspaper story about Anzac veterans, the diary of a young woman meeting Barry Humphries on an ocean voyage, and emails pleading for entry into a community safe from the dangers of a failing society. O’Beirne’s satirical style is enhanced by the assembly of these otherwise unrelated accounts: one, a letter from a 1930s lawyer regarding an Aboriginal prisoner, is followed by a contemporary report from Nauru. The final stories are all set during a near future of water shortages and climate disaster. If one or two of the stories seem too specifically local, too ‘Melbourne’, for a wider readership, in most O’Beirne inflects his identifiably Australian characters with a darkly comic and empathetic voice that will be recognisable to many. His best stories, especially those later in the book, possess a sense of political or social urgency. Altogether, this collection invokes Australia with its questionable past, ironic present and disturbing future.

Adrian Hardingham is a former bookseller based in Melbourne