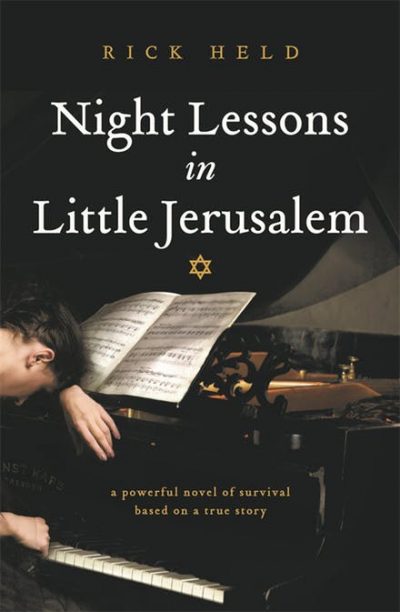 Night Lessons in Little Jerusalem is an impressive and gripping debut that blurs the line between memoir and fiction. Based on the wartime diaries of the author’s father, the novel tells the story of Tholdi, a 16-year-old Jewish boy living in Czernowitz—now known as Chernivtsi in Ukraine—during WWII. Tholdi is a musical prodigy who wants to become a conductor, but the year is 1941, and he and his family are forced into the Czernowitz ghetto. After two weeks in appalling conditions, they manage to bribe their way out as ‘skilled Jews’ and Tholdi gets a job at a weaving mill. However, before long he learns that the two brothers in charge are Nazi collaborators who are receiving a hefty commission for herding Jews onto trains bound for the concentration camps of Transnistria. Thanks to a chance encounter with a Romanian ‘gypsy’, Tholdi devises a way to save himself and his family—but it comes at a cost, especially to his integrity. This book is a fascinating retelling of true events, painting a vivid picture of Czernowitz and what is often called the forgotten Holocaust in Transnistria. Rick Held’s experience as a television screenwriter and editor shows in the fast pacing of the narrative, which will also appeal to anyone who enjoys well-developed historical writing.

Hilary Simmons is a former assistant editor at Books+Publishing and a freelance copywriter, journalist and editor