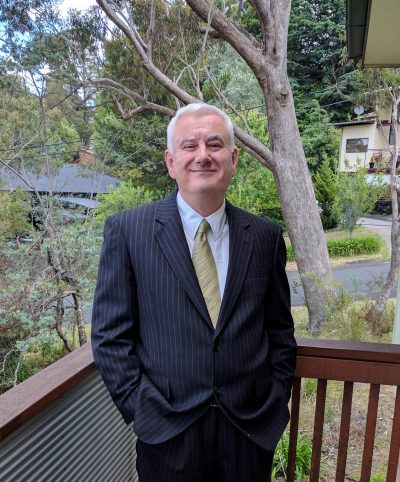 Novelist Julian Leatherdale has died, after an illness of less than 12 months.

Leatherdale was the author of three historical novels for adults, all published by Allen & Unwin (A&U) and beginning with Palace of Tears, which was published in 2015. It was followed by The Opal Dragonfly in 2018 and his third novel, Death in the Ladies’ Goddess Club, which was released in March this year. The Phantasmic Detective Agency, Leatherdale’s middle-grade fantasy adventure novel, is published by Eagle Books.

‘Allen & Unwin is fortunate to have been Julian’s home for his three historical novels for adults and, as his publisher at A&U, I was very much looking forward to a long association with Julian and his writing. His research is impeccable and his imagination creative and clever. He was a complete delight to work with in all aspects of publishing, and was warm and witty company at any time.

‘Julian was truly a man of many talents. He loved theatre and in his early years wrote lyrics for four comedy cabarets and a musical. In 2017, he wrote the short play A Life in Ten Meals for the theatre project Breaking Bread, and in 2018 the black comedy The Man Who Became Santa.

‘Julian discovered a passion for popular history as a staff writer, researcher and photo editor for Time-Life’s “Australians At War” series. He later researched and co-wrote two Film Australia–ABC documentaries, Return to Sandakan and The Forgotten Force, and was an image researcher at the State Library of New South Wales.

‘This love of history and the amazing stories his research uncovered led Julian to write his first bestselling novel, Palace of Tears, which was published by Allen & Unwin in 2015 and HarperCollins Germany in 2016, represented by Literary Agent, Selwa Anthony. He quickly became an authority on the extraordinary history of the opulent Blue Mountains hotel, the Hydro Majestic, on which the hotel in his novel was based, and his essay on the Hydro Majestic and Mark Foy was published on the Dictionary of Sydney website for the 2015 Blue Mountains Icons project.

‘Death in the Ladies’ Goddess Club is Julian’s third adult novel set within the dark underbelly of 1930s Kings Cross and its glamorous fringe. This novel was recently published in March 2020 and as ill as Julian was, he was also as enthusiastic, engaged, courteous and erudite as ever in the publicity he managed to complete for this book.

‘We will miss Julian so much and send our sincere condolences to his wife, his children, family and friends.’