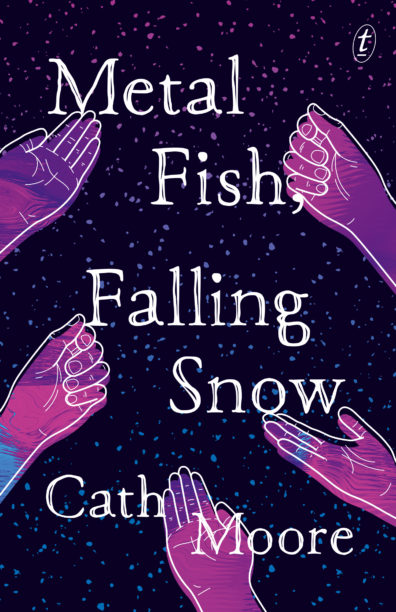 Fourteen-year-old Dylan blames herself for her mum’s recent tragic death. Left alone with her mum’s boyfriend Pat, Dylan has no choice but to leave her hometown and join him on a road trip through the outback to meet her absent Guyanese-born father’s family. However, Dylan and Pat have different ideas about what will happen when they reach their destination. On the journey Dylan’s ‘stupid smarts’ get her and Pat into a series of predicaments as she flees with a busload of grandmas, crashes Pat’s car and gets into a fight with local boys. Pat just wants the best for Dylan, whose unique way of seeing the world makes her vulnerable, while Dylan, who feels like a stranger in her own skin, plans on finding the boat she has always dreamed about and rowing her mum’s spirit across the ocean back to her home in France. First-time novelist Cath Moore renders Dylan’s uniqueness with grace and humour, imbuing her with endearing turns of phrase and eccentricities that make for an unforgettable character. Through Dylan’s encounters with the land and her struggle with her inner demons, Moore explores ideas of self-acceptance, identity and belonging. Astonishingly original, heartfelt and funny, Metal Fish, Falling Snow is recommended for readers 12 and up.

As Beautiful As Any Other (Kaya Wilson, Picador)  Nonfiction