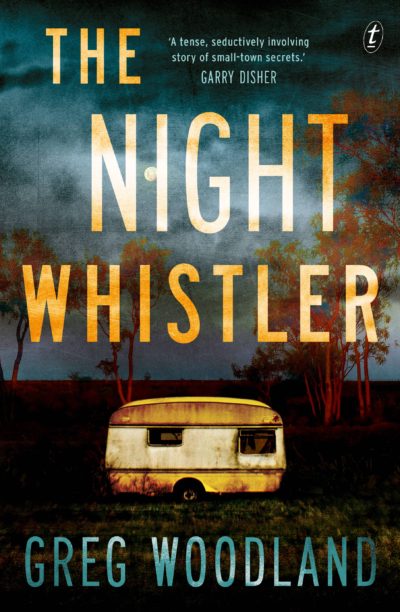 This may be Greg Woodland’s debut novel, but his career as a screenwriter shows through in the dialogue—especially in his rendering of the distinctly Australian lingo that flourished in mid-1960s regional Victoria. But beyond colourful phrases like ‘fine as a fairy’s fart’, Woodland captures the bygone innocence and intimacy of towns like Moorabool, which had a population of under 4000 at the time. Inspired by a true story from the author’s childhood, The Night Whistler follows Constable Mick Goodenough (pronounced ‘good no’), who’s been shunted off to the sticks after a contentious run as a detective in Sydney, and a preteen boy named Hal, who’s watching his parents’ marriage splinter apart at close range. When Hal’s mum starts getting threatening phone calls from a stranger who whistles with palpable menace, Mick suspects they’re linked to a rash of murdered pets and could escalate from there. Woodland keeps quite a lot of balls in the air, plot-wise, and while not all of it completely works, he builds increasingly effective suspense and strikes upon a fresh character in Hal’s spirited new friend Allie. Evoking the small-town intrigue of Holly Throsby’s Goodwood, this coming-of-age crime tale balances its more gruesome turns with relatable human warmth.

Doug Wallen is a freelance journalist, copywriter and editor.