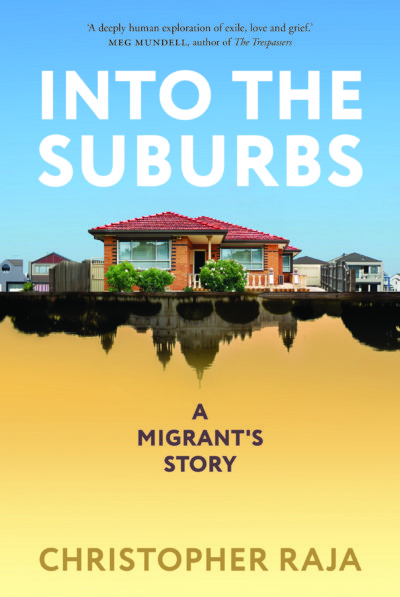 Into the Suburbs: A migrant’s story (Christopher Raja, UQP)

Christopher Raja’s Into the Suburbs is the author’s first foray into memoir, and documents his migration from Calcutta to Australia in the 80s. Drawn by the glamorous Australia of tourism commercials, Raja’s parents envision the country as a ‘clean’ and ‘classless’ paradise. Yet upon arriving in Australia, their interactions expose the limitations and small-mindedness of their new society, especially its racism and classism. As their ideal unravels, Raja’s parents also realise that white Australia does not share the same community and family values that Indian culture upholds. Raja is trapped, throughout his youth, somewhere between the austere serenity of suburban Melbourne, the dingy club scene of St Kilda and the urbane inner city. The author plunges us into the depths of his father’s disenchantment, using language that is both familiar and heartbreaking. ‘The students … laughed. There is no respect. No, I can’t take curries anymore,’ his father tells his mother, refusing to take her aromatic meals to the prestigious private school where he works in East Melbourne. Amid the difficulties of adjusting to Australian life, Raja still offers pockets of joy—a close-knit family relishing new pleasures, the sense of longing which pulses in the quiet suburbs, the sweet nostalgia for a home left behind. This all culminates in a poignant story, widely accessible and skilfully told.

Daniel Nour is an Egyptian-Australian writer and journalist. He is a member of Sweatshop Western Sydney, a movement for diverse Australian voices, and has been published in the New York Times, SBS Voices and Eureka Street.