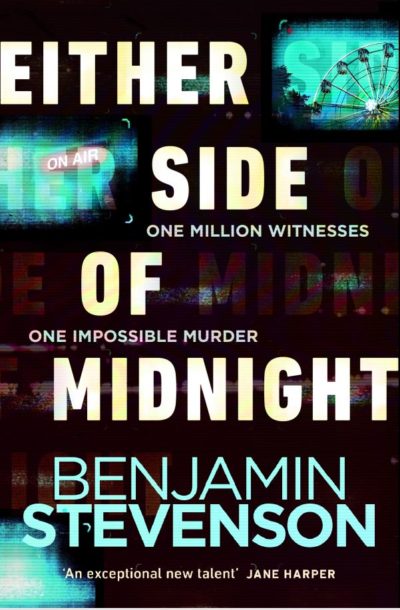 Either Side of Midnight (Benjamin Stevenson, Michael Joseph)

When TV presenter Sam ‘Mr Midnight’ Midland shoots himself on live TV, documentarian Jack Quick is watching from the prison cell his last production got him sent into. Sam’s twin brother, Harry, visits Jack to tell him that even though the world watched, Sam’s death wasn’t a suicide—but murder. Jack’s not into hunting down killers any more, but he needs the money. So when he gets out, he gets on the case. In the darkness of a live TV recording, what can people get away with? And how did one traumatic night in Sam and Harry’s teenage past affect their future? Following the success of Stevenson’s debut Greenlight, we are reintroduced to a flawed but appealing character. Jack is still fighting his own battles, including an eating disorder that ties into the guilt he feels over his comatose brother’s accident years earlier. Now, he’s fighting to expose a murder even he doesn’t believe occurred. The power of words is an idea seared into the pages of this novel—how could you possibly use them to convince somebody to kill themselves? Either Side of Midnight, which trips between light and dark, city and country, and twists the reader into knots, is for fans of solid Australian crime authors like Chris Hammer, Christian White and Candice Fox.

Fiona Hardy is a bookseller at Readings Carlton and the author of How to Make a Movie in 12 Days.