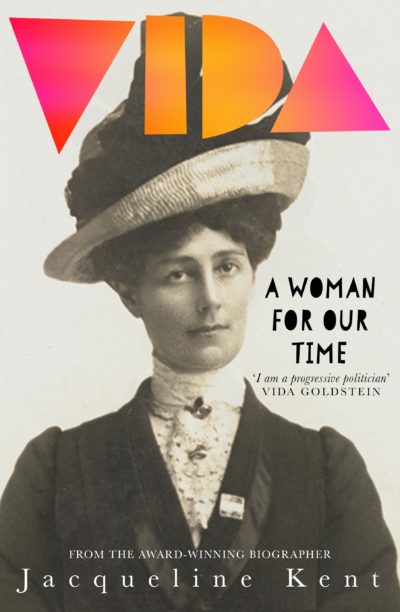 Vida: A woman for our time (Jacqueline Kent, Viking)

It’s a sad fact that most Australians are unaware of the correct pronunciation of Vida Goldstein’s name (a long ‘i’ in both), let alone that she was the first woman in the Western world to stand for national parliament—and went on, heroically, to stand five times before she was done. Nor that she campaigned tirelessly for social justice for women and children for over 30 years. But this will hopefully be put to rights by Jacqueline Kent’s absorbing biography, which is packed with illuminating historical detail from Goldstein’s life and times. An energetic teacher, an inspired writer and magazine publisher, and a devoted Christian Scientist, Goldstein turned down all suitors—including the dashing John Monash—and pursued her own path. Born in country Victoria, the eldest child of an independently minded, public-spirited mother and a complicated Irish‑Jewish father, Goldstein became an internationally celebrated feminist figure and a staunch ally of the suffragettes. She died four years after the end of WWII—a war that she, as a pacifist, saw coming in the mess of WWI. With her progressive socialist beliefs and armed with a calm inner strength, she is a visionary woman for our times—anyone trying to make sense of the misogyny directed at the Julia Gillard prime ministership, for example, would do well to read this book.