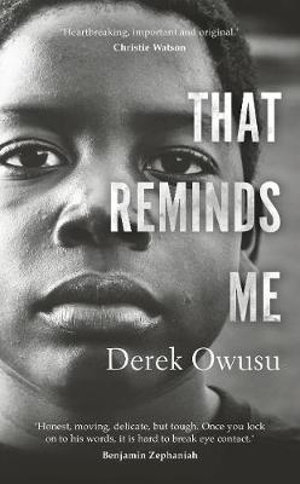 Derek Owusu has won the Desmond Elliott Prize for first-time novelists for his verse novel That Reminds Me (#Merky Books).

Owusu’s book, the semi-autobiographical story of a British-Ghanaian boy called K, was described by chair of the judges and previous Desmond Elliott Prize-winner Preti Taneja as ‘a unique, profound and transcendent work of literature: we want as many readers as possible to discover it—once they do they will return to again and again’.

‘That Reminds Me is written with a rare style that wrings pure beauty from every painful, absurd moment K must face,’ said Taneja. ‘Despite the terrors around him, this young black man has an instinctive love for the world that burns at the core of the book. The judges and I were as shattered by the truths of the story as we were moved by the talent of its writer.’

Owusu received £10,000 (A$18,020) prize money as well as a year of support and mentorship from the UK National Centre for Writing, which is running the prize for the first time in 2020 as part of its new Early Career Awards portfolio.