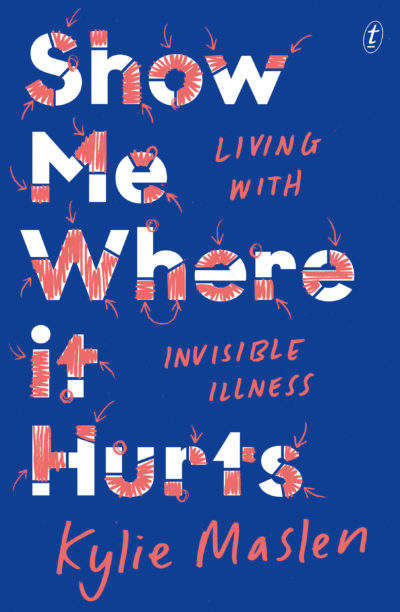 Show Me Where It Hurts: Living with invisible illness (Kylie Maslen, Text)

Imagine living with an invisible illness. For 20 years, Kylie Maslen has been doing just that: her chronic pain and bipolar II (the latter undiagnosed until she was 35) have shaped her reality in every way, from her sex life to her drug and alcohol consumption to her work as a writer. A series of personal essays tackling subjects such as housing affordability, fertility, meme culture and tattoos, Show Me Where It Hurts traces Maslen’s experiences of chronic illness and maps them against numerous pop culture touch points—Beyoncé, SpongeBob Squarepants and The Golden Girls included—and broader discussions of mental health, disability and ‘invisible’ conditions such as endometriosis. Some readers may be confronted by Maslen’s raw honesty—she’s frank about her substance abuse and the myriad ways in which her body has been wracked by pain and surgery—but her confessional style helps illuminate the misogyny of a medical establishment that frequently disbelieves or underplays women’s health problems. ‘It is not my body that is at fault,’ she asserts, ‘but society’s failure to deal with bodies like mine.’ Show Me Where It Hurts is a timely and engaging essay collection for readers of nonfiction that’s unflinching yet compassionate, such as Clare Bowditch’s Your Own Kind of Girl and Lisa Taddeo’s Three Women.

Carody Culver is a freelance writer, assistant editor at Griffith Review and a contributing editor at Peppermint magazine.