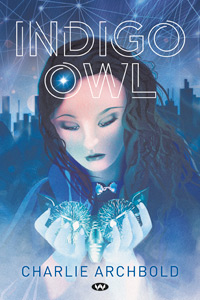 Scarlet, Dylan and Rumi are new students at the Arcadia Institute, where they will receive the training required to turn them into good citizens of the corpocratic planet Galbraith. But each student is hiding a secret: Scarlet’s scientist mother, long thought dead, may be alive; Dylan’s synaesthesia makes him an outcast to his conservative father; and ambitious genius Rumi wants to use them both to bring down the entire corrupt system. Indigo Owl imagines an eerie corporate future where company loyalty comes before bodily autonomy, and reproductive rights are just another way to control people. In sparse, propulsive prose, Archbold offers a YA thriller in a science fiction suit, a novel that is at its best when the characters are trying to stay one step ahead of the game. The nascent romance between Scarlet and Dylan is sweet, but without a doubt the hard-headed Rumi is the standout character, a hyper-competent miniature Machiavelli that young readers will either love or hate. Personally, I adored her. Indigo Owl is perfect for YA readers who loved Eve of Man by Giovanna and Tom Fletcher, and Illuminae by Amy Kaufman and Jay Kristoff.

Catherine Moller is an editorial assistant in the illustrated nonfiction division of Titan Books in London. She has previously worked with Queensland Writers Centre and Alex Adsett Publishing Services in Brisbane.