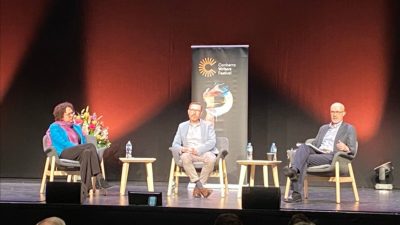 CWF 2020: All live events sold out; ‘strong uptake’ for streaming

This year’s Canberra Writers Festival (CWF) included a mix of live and online-only events with over 60 artists. All events were streamed, with 34 writers and moderators appearing in-person and all 17 live events selling out.

In its fifth year, the festival was much smaller due to Covid-19, featuring 28 events in 2020 compared to 80 in 2019. The number of tickets to live events was limited, in adherence to social distancing protocols, with CWF spokesperson Pieta Horgan telling Books+Publishing ‘demand way outstripped availability’ for live, ticketed events.

In terms of online access, Horgan said, ‘We were really pleased with a very strong uptake for event streaming. All events featuring international artists performed particularly well. We continue to receive requests from people wishing to stream events.’ The festival organisers anticipate that streaming will be part of next year’s event.’

Festival highlights included breakfast served with a bloody Mary at the National Press Club and Mary Trump appearing from her home in Long Island New York, an event which has been viewed over 85,000 times on the ABC and iView.

Dymocks was the bookseller for the festival. Books written by authors who appeared at in-person events—such as Richard Fidler, Rick Morton and Adam Liaw—sit at the top end of its festival bestsellers chart.

In response to requests from many who couldn’t stream events at the time they were on, CWF said a limited number of selected highlights will be released on YouTube ‘in coming months’.