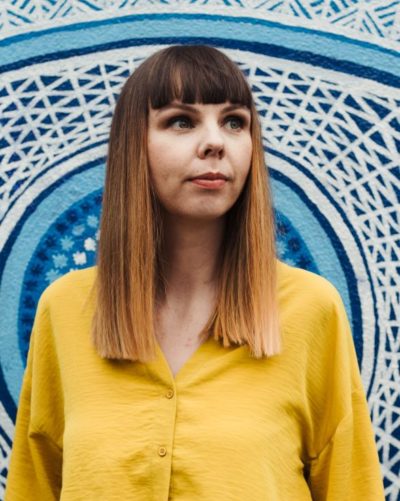 Adventure time: Shivaun Plozza on ‘The Boy, the Wolf and the Stars’

Shivaun Plozza’s middle-grade debut The Boy, the Wolf and the Stars (Puffin, 20 October) is a fantasy adventure about a boy who is tasked with returning the stars to the sky. Reviewer Karys McEwen said Plozza’s ‘timeless’ new novel is a ‘bittersweet tale filled with hope, longing and allegory’ that ‘crescendos to a stunning conclusion’. She spoke to the author.

Congratulations on The Boy, the Wolf and the Stars. What was the writing process like for this new novel?

It started out as a short story way back in 2000. After I finished it, I couldn’t stop thinking about the characters and the world and I wondered if there was a novel in it. That said, the idea has altered a fair bit in the intervening 20 years and I didn’t start seriously working on it until about 10 years ago. I had it ticking away in the background while I wrote Frankie and then Tin Heart, occasionally bringing it out to toy with it before putting it away again to let it steep. I only focused on it exclusively for the last couple of years, when I finally had time to devote to it. It was nice to let a story grow over a long period of time, though—I think that helped me flesh out the world and the characters in a meaningful way.

This is a departure in genre and readership from your past work. Why did you decide to write a middle-grade adventure?

It doesn’t feel like a departure because I’ve always been interested in middle-grade and the fantasy/adventure genre, both as a reader and as a writer. I’m a huge Diana Wynne Jones fan and I’ve wanted to write something in that vein for a long time. In fact, I was more surprised to find myself writing contemporary realism for the first two novels. The reason why I held off writing fantasy for so long boils down to fear. As much as I’ve always loved reading fantasy, writing a novel in the genre scared me—I knew how much work goes into constructing entire worlds from scratch and I was afraid I wouldn’t be able to pull it off. That’s why I had it bubbling along in the background for so long, waiting for me to have the courage to see it through properly. And as for writing middle grade, the voice came to me naturally and I had so much fun with it. I will definitely be writing more middle-grade fantasy/adventure in the future.

The world-building and character development is very strong in the novel. Where did the ideas for Ulv and Bo come from?

I’ve always loved Scandinavian folklore and some of the world-building grew out of that love but over the years the world morphed into something a lot more original. I think at its heart it still has the feel of an epic folktale (at least I hope it does!).

One of the key influences was Ragnarok and the idea of a wolf eating the stars—I kept wondering: what would a world without stars be like? That thought tied in with some themes I wanted to explore: fear and anxiety. I have an anxiety disorder and I wanted to look at that through the lens of one of my worst childhood fears, which was a fear of the dark (I slept with the light on for years!). I guess the true genesis of this story is me looking back at my younger self and asking: Where did your fear come from? What do I know now about facing anxiety that I wish my younger self had known? So in writing this story, I created a world where night time was something truly to fear—complete darkness filled with evil creatures that are shadows come to life. I put a boy, Bo, in the middle of this world and challenged him to find a way to end the night-time curse. So it’s more about overcoming fear than anything else.

But there are fun creatures, too, like the Colossal Spit-Mouth Slug, which is just me thinking: what’s a cool but ultimately incredibly gross creature I can come up with? I also have a bit of a fascination with trees and I think there’s a sort of romanticism in the way the landscape drives the tone of the novel, particularly in relation to how the magical plague works its way through the natural landscape. That element ended up driving another of the novel’s themes, which is the idea of how fear spreads with misinformation and with people not engaging critically with what they’re being told about the world.

Do you have a reader in mind when you write? What type of reader do you imagine will like this book?

I didn’t have a specific reader in mind but I did have a list of aims. I wanted the pacing to be strong, I wanted the world-building to be rich and have a lot of depth, I wanted it to be funny but also a little scary, and I wanted the relationships between characters—the unexpected family Bo builds around himself—to be at the heart of the story. I hope the book has a broad audience—it’s strong in action and adventure but there’s also a focus on self-agency and personal growth. I worked hard to find a balance between sweeping the reader along with the adventure while giving them the time and space to engage with the characters’ emotions and the themes of the novel. I think any reader who enjoys adventure, fantasy worlds and character-driven stories will like this book.

There are so many great local middle grade books available at the moment. If readers enjoyed The Boy, the Wolf and the Stars, what else would you recommend to them?

The Republic of Birds by Jessica Miller (Text), the ‘Nevermore’ series by Jessica Townsend (Lothian), The Secret Library of Hummingbird House by Julianne Negri (Affirm), The Endsister by Penni Russon (A&U) and The Beast of Hushing Wood by Gabrielle Wang (Puffin).

I’ve just finished reading Tristan Strong Punches a Hole in the Sky by Kwame Mbalia (Disney-Hyperion) and it’s utterly brilliant—strong voice, impeccable world-building and so full of humour, heart and adventure. I highly recommend it.