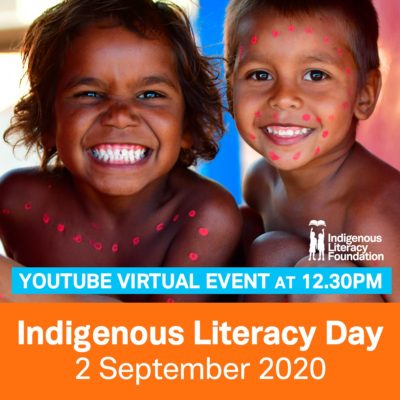 More than 3500 viewers tuned in live to the Indigenous Literacy Day (ILD) ‘visual event’ streamed on YouTube on 2 September, and almost 17,000 viewers have now watched it.

The video also shows children and community members from Tiwi Islands, Jilkminggan in the Northern Territory and Bidyadanga in Western Australia sharing their stories. The ILF has produced two additional virtual events, including one for remote Indigenous communities, and a primary and early learners ILD event, which engaged over 2000 schools.

ILF executive director Karen Williams said: ‘The event was the Indigenous Literacy Foundation’s first virtual event which not only marked its tenth anniversary but more importantly celebrated language and Indigenous literacy. The feedback has been overwhelmingly positive. ILF thanks the Australian book industry for their ongoing support and encourages everyone to view and share these as widely as possible.’

The main ILD event can be viewed on the ILF YouTube channel, and primary schools and early childhood centres can watch the education event via the Sydney Opera House website.