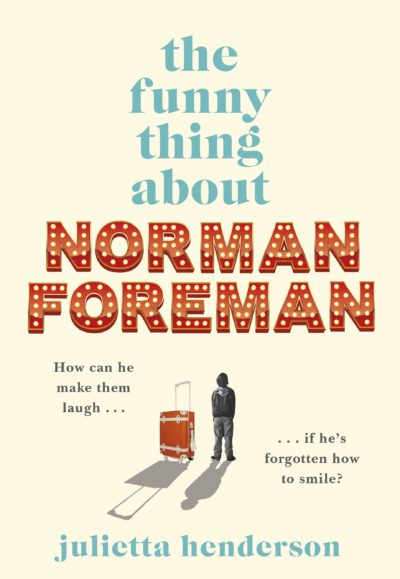 Norman Foreman isn’t your average 12-year-old: he’s obsessed with classic British comedy, he’s got raging psoriasis, and he and his best mate Jax have a five-year plan to perform stand-up at the Edinburgh Fringe Festival by the time they’re 15. But when Jax dies suddenly, Norman’s world falls apart—and his mum, Sadie, decides to enact a wild new plan to help piece it back together again. When she and Norman embark on a road trip to Scotland with Sadie’s friend Leonard, a surprisingly IT-savvy retiree, they’re on a mission to achieve two potentially impossible goals: find out who Norman’s father is, and bring forward Norman and Jax’s Edinburgh Fringe dream by three years. But can Norman—always the straight man in his double act with Jax—survive on stage alone? And can Sadie overcome the grief she’s been carrying since before Norman was born? While the outcome of Julietta Henderson’s big-hearted debut novel is never really in doubt, The Funny Thing About Norman Foreman serves up plenty of rollicking misadventures and cathartic heartstring tugs along the way. The literary equivalent of a feelgood British comedy film, this is a larger-than-life tale about coming to terms with profound loss. It’s a page-turning summer read for fans of writers such as Graeme Simsion, David Nicholls and Sue Townsend.

Carody Culver is senior editor at Griffith Review and a freelance writer.