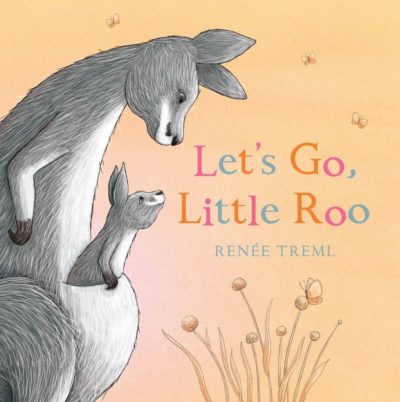 Prolific author Renée Treml says she wrote Let’s Go, Little Roo from experience with her own shy child, and Little Roo’s stubborn emotions and thought processes are certainly recognisable. (Though the book is aimed at the very young, from toddlers to early primary schoolers, plenty of adults will also relate to the struggle between apprehension and adventure.) There’s nothing particularly unique about the text or the narrative arc, but the satisfaction and nuance is in the feelings captured—Little Roo’s muttered responses to her mother’s enticements to venture from the pouch are both familiar and distinctive, as she tries to cling to the dubious comfort of her own fears despite the growing urge to find something to nibble and someone to play with. Ultimately, it’s Little Roo’s compassion for another shy creature that draws her out; empathising with someone else (‘Maybe he’s afraid’) helps her overcome her own worries and find some bravery for both of them—and for children who might recognise themselves in the book. Despite the story being short and straightforward, Treml manages to build a kind and dynamic little character in Little Roo (contrasted with her mother, who is fairly neutral and sketchy). The illustrations are clean and simple, with the pleasing, scratchy line-drawn fur of the roos standing out against backgrounds of wide hills and plains in different pastel hues on each page.

Anica Boulanger-Mashberg is a freelance editor, writer and reviewer, and has worked as a bookseller at The Hobart Bookshop for over 10 years.