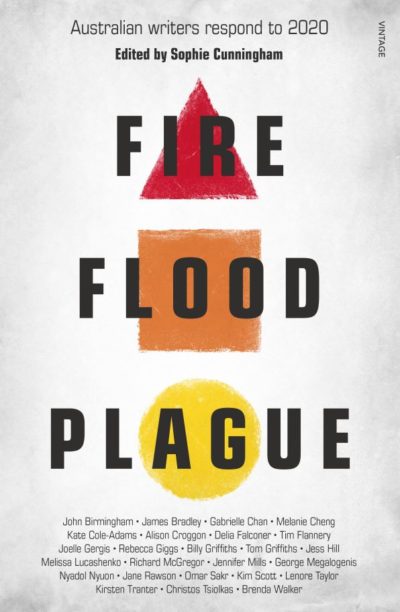 This deeply unsettling book bravely attempts to interpret, chronicle and reflect on the nightmarish events of this year. While I relished the opportunity to try to make sense of 2020, my eyes grew wide with fear as I read on. Laid bare in Fire, Flood, Plague is the terrifying, sad and urgent reality of climate change, in the form of last summer’s megafires and subsequent floods, including the destruction of one billion native animals. Myriad perspectives come from an impressive assemblage of writers, including John Birmingham, Delia Falconer, Melanie Cheng, Christos Tsiolkas, Brenda Walker, Kim Scott and Tim Flannery, among others. While the content on the fires is strong, the severity, longevity and diversity of pandemic experiences aren’t as evident, no doubt due to timing. In addressing this, editor Sophie Cunningham explains many essays were rewritten to encompass events as they unfolded and that some ‘difficulties and traumas’ simply couldn’t be written about and lived through simultaneously. The essays are engrossing, weaving the personal, political and philosophical, and their brevity is ideal, making this volume easy to dip in and out of. It will sit comfortably alongside similar volumes on the fires and Covid-19. However, there is a fatiguing sense that, in illuminating the effects of climate change writ large, this book will primarily attract the already converted.

Joanne Shiells is an editor, writer, teacher and former bookseller.