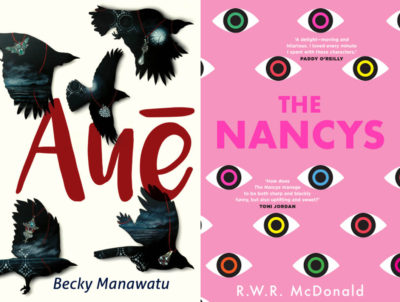 A novel portraying domestic violence and gang life, the book is told from the perspectives of eight-year-old Arama, his teenage brother Tauriki, and young woman Jade.

The judges described Manawatu’s novel as ‘a breath-taking expose of lives lived on the margins, and the fight for redemption and absolution. Manawatu doesn’t use crime as a plot device but shows it woven into the fabric of her characters’ lives, defining them, sometimes destroying them, and serving as a perverse unifier.’ Manawatu’s novel also recently won the fiction prize at the Ockham New Zealand Book Awards.

The judges described McDonald’s small-town murder mystery, in which eleven-year-old Tippy Chan teams with her visiting uncle and his boyfriend to solve the murder of her teacher, as ‘hilarious and inventive; the dynamic between the young protagonist and the adult characters is unusual and special … A clever hat-tip to one of the most indelible female characters in the genre, and a story that blends crime and humour in unexpected ways.’

The winners, chosen from shortlists announced in August, were announced at the WORD Christchurch Festival.

The Ngaio Marsh Awards are presented annually for the best crime, mystery or thriller writing by New Zealand citizens and residents, and are named in honour of Christchurch crime writer Ngaio Marsh. The winner of last year’s best novel award was Fiona Kidman for This Mortal Boy (RHNZ Vintage), while the winner of best first novel was J P Pomare’s for Call Me Evie (Hachette). In 2019 a nonfiction prize was awarded to Kelly Dennett for The Short Life and Mysterious Death of Jane Furlong (Awa Press).