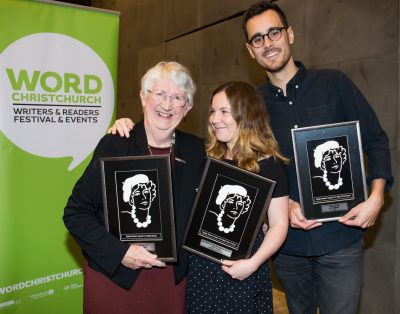 The story recreates the life of young Belfast immigrant Albert ‘Paddy’ Black, who killed a man in 1955 in apparent self-defence and became one of the last people hanged in New Zealand, with the book suggesting the 20-year-old may have been the victim of a miscarriage of justice. This Mortal Boy was previously honoured at the Ockham New Zealand Book Awards, NZ Booklovers Awards and the NZSA Heritage Book Awards.

The winner of best first novel was J P Pomare’s psychological thriller Call Me Evie (Hachette), which judges said was ‘an interesting take on unreliable narrators and clever explorations of memory … a suspenseful, absorbing tale with a strong sense of New Zealand.’

Kelly Dennett’s The Short Life and Mysterious Death of Jane Furlong (Awa Press) won the best nonfiction prize. The book takes readers behind the lurid headlines about a young woman being snatched from K Road and explores Jane’s wider life and the impact of her disappearance on those who loved her.

The winners were announced at a ceremony at WORD Christchurch on 14 September.