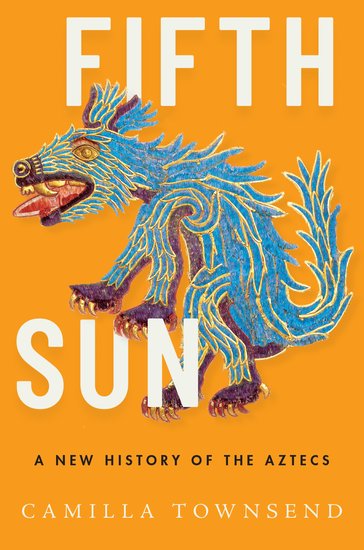 Camilla Townsend has won the 2020 Cundill History Prize for her work on Aztec history, Fifth Sun: A new history of the Aztecs (OUP), reports the Bookseller.

Fifth Sun uses Nahuatl-language sources written by the indigenous people of Mexico to ‘shift the viewpoint on Aztec history from the only one accessible up until now—the Spanish—and give an authentic historical voice to the native Mexicans of centuries ago.’ Judging panel chair Peter Frankopan said Fifth Sun is ‘a work of breathtaking originality, accomplishment and importance’.

‘Camilla Townsend revolutionises how we should look at Aztec society before, during and after the arrival of Europeans in Central America,’ said Frankopan. ‘After more than 500 years, we are finally able to see history through the eyes of the indigenous people themselves rather than those of their conquerors. Not many books completely transform how we look at the past. This is one of those that does.’

Townsend’s work was one of three finalists for the award, which were chosen from a shortlist of 10.

The prize—the highest monetary-value nonfiction award in the world—is administered by McGill University in Montreal and is open to any history book published in English. The winner was announced as part of the Cundill History Prize Festival, which ran online from 2–3 December.