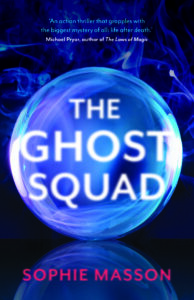 This young adult thriller starts as a post-collapse story and then takes a supernatural turn. It begins with ‘the pulse’, a solar flare that shuts down all electronics, pitching the world into darkness and chaos. Polly and Swan are teens in ‘post-pulse’ society, one of government control, single source media and virtually no internet. It’s all part of a global conspiracy to hide what the pulse revealed: scientific evidence that something persists after death, and sometimes even returns. When her detective mother disappears, Polly has no choice but to trust resistance member Swan as he tries to keep them both from the grasp of the mysterious government ‘Ghost Squad’. When they stumble across Kel, a sweet-natured little boy who may be a reincarnated spirit, they realise that he’s what the ghost squad and others are really after—someone who could tell them what lies beyond the mortal realm. No-one is what they seem, and even allies have secrets, so the only people Polly and Swan can trust is each other. This is a dynamic and exciting thriller with smart, relatable characters, similar to Sean Williams’s ‘Twinmaker’ series. It’s intense, but without profanity and virtually no violence. Though the death/afterlife aspects of the story are important, its core is about trust, loyalty and the courage to do what is right—even at a personal cost. Although it’s not quite as dark, The Ghost Squad should appeal to fans of Stranger Things and readers of John Marsden’s ‘Tomorrow’ books.