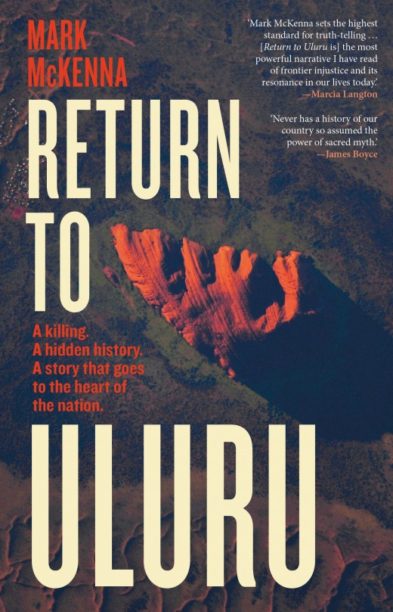 ‘Perspective is everything,’ writes historian Mark McKenna in Return to Uluru, his mesmeric history–true crime hybrid. When starting the book, McKenna expected to tell an expansive history of central Australia, but instead stumbled upon a smaller and painfully potent narrative. He foregrounds the life of Bill McKinnon, a long-serving Northern Territory police officer who shot and killed an unarmed Indigenous man, Yokununna, at Uluru in 1934. We follow McKenna as he skilfully pieces together what happened that day and the resultant trial, which obfuscated the truth. Thanks to McKinnon’s meticulous life-long self-documentation—he was a self-styled ‘policeman photojournalist’—there’s plenty of source material to pluck from, which McKenna uses as the bones for a grisly narrative. Behind it all is Uluru itself. With the precision of a historian and the lyricism of a storyteller, McKenna explores white Australia’s hubristic relationship to the rock—from blustering European explorers to tourists furious at the 2019 closure of the Uluru climb. In the same vein as Bruce Pascoe’s Dark Emu or Chloe Hooper’s The Tall Man, Return to Uluru suggests shifting our perspective on the past can help us better comprehend our present. As the nation drags its heels on adequate truth-telling and injustices against First Nations people continue to be perpetrated, books like this help expose the source of the rot.

Kim Thomson is a freelance writer and editor.