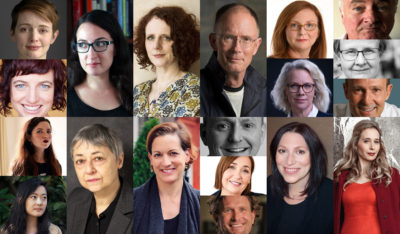 The full program has been announced for Adelaide Writers’ Week (AWW), which features a total of 147 guests and runs from Saturday, 27 February to Thursday, 4 March 2021.

Based around the theme of ‘Unstable Ground’, the 2021 festival features an expanded Australian line-up appearing in-person at the Pioneer Women’s Memorial Garden, while international authors will appear in the Garden via livestream. A new ticketed events series features 12 sessions that will be livestreamed and able to be viewed online, from anywhere in Australia, with tickets purchased in advance on a ‘pay what you can’ basis.

The festival will also feature events for younger readers on the weekend, as well as two new series: Be the Change, a day centred on activism and advocacy featuring guests such as Sally Rugg, Briggs and Jean Hinchcliffe, and The Business of Being a Writer, hosted by Fremantle Press publisher Georgia Richter and featuring four panels on the business of publishing. Ali Cobby Eckermann, Natalie Harkin, Dominic Eliseo, Alexis West, Steven Pappin, Celestine Rowe and MC Edoardo Crismani will feature in the inaugural First Words panel, a showcase of First Nations writing.

Returning programs include Twilight Talks, slam poetry performance Hear Me Roar!, and See Through My Hands, an Auslan-interpreted showcase of Deaf storytelling presented in conjunction with Writers SA.

This year’s festival is the third to be directed by Jo Dyer, who said, ‘After the challenges and frustrations of the last twelve months, there is a real hunger amongst authors and audiences to gather as a community and celebrate literature and ideas.

‘Despite the pre-Christmas Covid scares, we are optimistic that all our Australian participants will be able to join us in person in the Garden as we come together to contemplate the state of the world and the state of our reading, asking the big questions like, “What just happened?” and “What happens next?” We are very much looking forward to hearing an array of answers from the collection of fine, curious and incisive minds in our line-up, and reconnecting with our audience after the past year.’

To see the AWW 2021 program, visit the Adelaide Festival website.