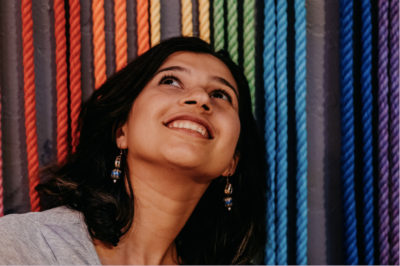 For me, one of the most important themes of Sunburnt Veils is connection and everything that stands in its way. At the beginning of the book, Tara’s life revolves around her goal to become a doctor so she can one day make a difference. All through high school she used that as an excuse to not have to deal with her shyness and get to know people—and, as a result, she spends a lot of the book having to learn how to make friends.

In many ways, the book is also a celebration of female relationships. I do think the connection that Tara has with Mitra, with her mum and grandma, with Sam and even the relationship Mitra has with Tara’s mum, are all pretty special.

The book also explores how fear, Islamophobia and racism gets in the way of connection. Jess’s reaction to Tara is the most obvious example of that, but I think it also really comes to the fore with Tara’s relationship with her dad and his biases. Fear of connection is also a major stumbling block for Alex and Tara. For me, so much of the book is about celebrating the ‘magic’ that happens when people can actually see each other for who they are and be good with that.

Like Tara, you were politically active from a young age. How much of Sunburnt Veils is inspired by your own experiences and what else encouraged you to write a YA that is so politically focused?

Sunburnt Veils was hugely shaped by my experiences at uni because I think that stage of life is incredibly fun, vibrant and formative. I loved uni and so much of that was because I was involved in student life, and being involved in politics was really pivotal in helping me realise what I believed and what I wanted to do.

I wrote a political book, because it’s such a big part of who I am. Also, young people are hugely political, from organising school strikes around climate change, to the work around LGBTQIA rights and recognition, to working on Black Lives Matter and changing the date of Australia Day and so much more. Young people are at the forefront of so many movements and new types of organising that in some ways, they felt like the most natural audience for political fiction.

I found Tara’s fight to join the student union a particularly interesting part of the novel and something I haven’t really read about in a young adult book before, especially not one set in Australia. What advice can you give young people about stepping up against injustices and fighting for what they believe in?

Just get started. You learn so much by volunteering with organisations, running campaigns, writing opinion pieces. There are so many different ways to create change, and depending on your personality or the issue you’re interested in, it’ll look different. I think the biggest thing I see people do is think that they just need to read one more book, or have one other thing before they can do something. You don’t. You have everything you need to get started. That’s not to say you won’t make mistakes. You will. A key part of success is listening, asking for help, taking feedback and learning from those around you—but none of that will happen if you never get started in the first place.

If you want to get started, try Campaigns By Me or Change.org—and if you’re looking for a great organisation that focuses on racial justice in Australia check out Democracy in Colour, who run campaigns and also have an excellent traineeship program. Also, the Australian Youth Climate Coalition has awesome chapters around the country and they’re a great place to unleash a desire to get involved in solving the climate crisis.

I really enjoyed all of the references to fantasy books and TV shows throughout the story, like Sarah J Maas’s Throne of Glass and the iconic Buffy the Vampire Slayer. What impact do you think these have on Tara in the novel and why do you think these kinds of stories are important for young people?

As Tara grows into her own leadership in the book, the fantasy stories give her anchor points and role models. She’s read so many different versions of the hero’s journey that it helps her recognise what she’s going through and makes it a little less difficult to navigate. I also think that because Tara didn’t grow up with religious stories per se, in some ways fantasy characters are how she relates to some of the values that drew her to her faith too. They give her concrete examples of how you show loyalty, stand up for what you believe in, and don’t sell yourself short even when things are tough.

In general fantasy stories are so crucial in helping young people think critically about power. So much of fantasy, from Harry Potter to the Hunger Games, is about questioning power, and propaganda, and resistance. I think that so much of that critical analysis is somehow easier in a fantasy world—and building those skills there makes injustice more identifiable when we’re faced with it in our day-to-day lives.

What do you hope readers will take away from Sunburnt Veils?

Sunburnt Veils is in a lot of ways an exploration of how racism and Islamophobia plays out and is reinforced in day-to-day life, in universities, the media and even within communities and families.

While I’d like people to take away some newfound understanding of that reality, or validation for their own experiences, I hope the thing that stays with them most is the fierce friendship between Mitra and Tara.

Tara is the main character but Mitra was the one who got under my skin in the best ways while I was writing. I hope people remember the two of them—their spunk, their passion, their flaws and rawness—and realise that Australia is full of Taras and Mitras, and try to help take away some of the roadblocks that stand in the way of more of us getting to really know them.

The last thing I read was Sara Saleh’s poetry, which I loved and made me feel so seen. The last book I read and loved was A Sky Beyond the Storm by Sabaa Tahir (Voyager). I mean, a strong woman-of-colour main character who’s drawn into an epic quest, with a great romantic subplot—what’s not to love?