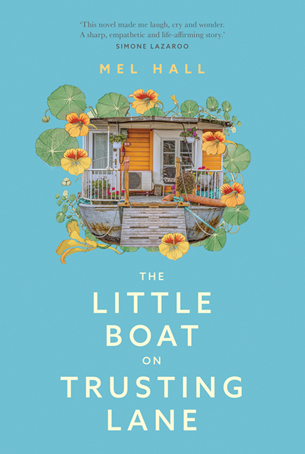 In this debut novel set in an exaggerated version of the alternative wellness industry, Richard, an ageing wellness guru, runs his alternative healing centre from a rundown houseboat in the middle of a scrapyard in Fremantle. With the help of Finn, a secret sceptic lost in a world of chronic pain and sexual confusion, and August, a young enthusiast with hidden mental health problems, the group treats those seeking spiritual guidance and restoration. Each character fearfully holds on to the past, unknowingly stunting their own spiritual journey and their ability to grow and love. When the charismatic self-described ‘aggressive healer’ Celestiaa Davinaa comes into their lives, she adds a level of complexity to each character’s search for meaning with her overbearing belief in her own righteousness. As Richard, Finn and August interact with Celestiaa, they are each forced to confront their own beliefs and the internal forces that are holding them back. Mel Hall has created a thoughtful story about the quest for personal meaning, exploring themes of invisible illness, sexuality, community, faith and spirituality. The Little Boat on Trusting Lane will appeal to lovers of quirky fiction with a hint of satire, as well as fans of wellness documentaries and reality TV shows such as The Goop Lab and (Un)Well.

Chloë Cooper is a freelance writer and a bookseller.