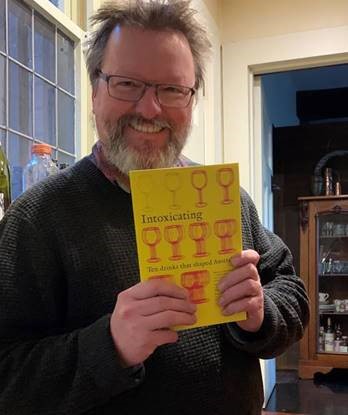 Awards judge John Hoskins said Intoxicating is ‘a book that anyone with an interest in humanity would enjoy; it is a drinks’ book that will stand the test of time’. He noted that what made Allen’s book ‘the outstanding work’ within its shortlist ‘was Max Allen’s achievement in weaving the minor world of drinks into a major historical and cultural context’.

Allen is a journalist and an honorary fellow in history at the University of Melbourne. He is currently columnist for the Australian Financial Review, Australian correspondent for jancisrobinson.com and a long-time contributor to Gourmet Traveller magazine.

‘I’m gobsmacked, to be honest; there was such a strong field of finalists in the Drink category for this year’s André Simon Awards, I’m honoured and humbled that the judges picked my book from the group,’ said Allen. ‘My first book, Red and White, won the same award in 1999, which was a massive boost early on in my career. Winning it again, 22 years later—the first time, as far as I know, that an Australian has won an André Simon Award twice—is a real thrill.’

Established in 1978, the UK awards recognise the achievements of food and drink writers around the world. For more information about this year’s winners, see the website.