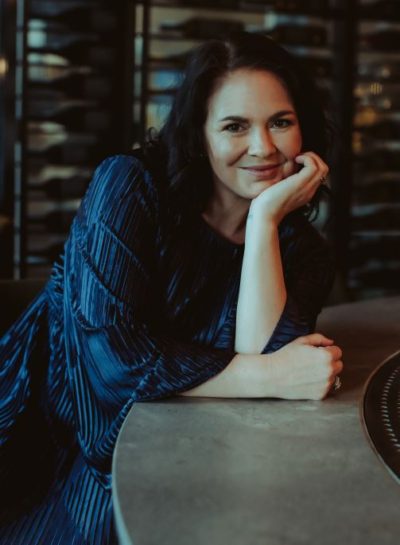 Jacqueline Bublitz on ‘Before You Knew My Name’

Jacqueline Bublitz’s debut novel Before You Knew My Name (A&U, May) takes the crime fiction trope of a jogger discovering a dead body and turns it on its head. Bublitz’s novel follows Ruby, who discovers the body of Alice in New York City’s Riverside Park. Unbeknownst to Ruby, Alice is watching on as Ruby embarks on a journey to unravel the mystery of her death. Reviewer Fiona Hardy spoke to Bublitz about her ‘lyrical, beautifully written’ novel.

Before You Knew My Name is about two women—Australian Ruby and Wisconsinite Alice—whose paths do not cross until after one of them is murdered by the Hudson River. Both escaped pain in their old lives by moving just weeks earlier to the city. At what point in the creation of this book did you realise this had to be a specifically New York story?

I knew from the beginning this would be a New York story. Thanks to popular culture, New York is a city you feel you know, even if you’ve never been there, and it wasn’t hard to imagine both Alice and Ruby holding onto that romantic notion of New York as the place you go to ‘make it’. Especially if it is the remaking of your life. New York worked so well for these characters’ motivations, but just as importantly, the setting worked for the plot too. I needed it to feel plausible that Alice could fall through the cracks at some point, and the reality is New York can be a lonely, indifferent place for an outsider. I still have my own romantic notions of New York but living there for five months in the name of ‘research’, I learned a few of the harsher realities, too.

There is a slow unfolding of truth in this book, layers of grief peeled back to reveal what happened and why Alice’s identity remained unknown for so long. As the author, was it hard to pace yourself to keep the truth hidden?

For the most part, I don’t write in a linear fashion. I think this helps with that sense of peeling away the layers, because I was often working backwards from a moment of truth, trying to understand how my characters got to that point, rather than propelling them towards it. It also helped that Alice is sometimes an unreliable narrator. There are certain aspects of her story she is reluctant to reveal, and this made it easier to pull some threads tight, and dangle others. Ultimately, pace is never easy to master, especially when you give away a major plot point on the very first page, so I’m very grateful to my brilliant agent and editors for helping me get the momentum right.

Before You Knew My Name is suffused with kindness and hope despite the bleak subject matter. What made you want to put this kind of spin on the subject of murder? The story discusses the violent death of a young woman, and how that occurrence is commonly portrayed, but your book never trivialises it or the women involved—how did you work to strike that balance?

I’m so glad those messages around connection and hope come through! The subject matter is bleak, but it was important to me that I didn’t bombard the reader—or devastate them. I often get frustrated with how violence against women is reported or represented, and I was determined not to exploit Alice, or any of the real-life women and girls her story reflects. Importantly, I didn’t start out writing a crime novel, or a thriller, though elements of both have certainly made their way into the book. Instead, I wanted to examine what we lose when another bright young girl is murdered, and I was especially tired of perpetrator-led narratives, which is where I got the idea to explore the connection between the victim and the woman who found her body. With the relationship between Alice and Ruby as the focus, I was suddenly able to move beyond the crime elements and really centre this story on the ways we can help each other heal from trauma and loss.

The pandemic must have been a large background presence in the creation of your debut novel. How has it affected the experience of writing Before You Knew My Name?

We were already on submission when the pandemic hit. I had just landed in New Zealand to spend some time with family, which wasn’t the worst place to get stuck, all things considered. Outside of not being able to meet my publisher back in Australia, I guess the primary impact on the book itself was that all of my notes and research from my time in New York remain locked up in a storage facility in Melbourne, out of reach. I had always imagined going back to New York to fact check certain aspects of the story (any excuse!), and this seemed a given if I ever got a book deal. As it happens, the deal came through on the eve of New Zealand going into lockdown, so it was just me and the family dog celebrating the good news together and, after that, a lot of reliance on old photographs and Google Street Views of Manhattan. Now it’s all about waiting for that travel bubble to open up so I can get back to Australia as soon as possible!

Do you read within your genre during the writing process? What are you reading now that your book is about to be out there in the world?

At the ideas stage in particular, I tend to stick to nonfiction that relates to the themes marinating away in my head. In the earliest days working on Before You Knew My Name I carried around dog-eared copies of The Body Keeps the Score by Bessel van der Kolk (Penguin Press) and I’ll Be Gone In the Dark by Michelle McNamara (Faber), and towards the end I devoured Three Women by Lisa Taddeo (Bloomsbury). Not exactly light reading, but these books taught me so much about trauma, and true crime, and all the ways we can hurt ourselves and each other. It helps that they’re all beautifully written, too.

As to what I’m reading now, I have a pile of novels by fellow debut authors on my bedside table. Recent standouts include Last One At The Party by Bethany Clift (Hodder & Stoughton) and Luster by Raven Leilani (Picador), but there are so many books I want to dive into, including Debra Oswald’s latest, The Family Doctor, and Love Objects by Emily Maguire (both A&U)—I’m going to read for a week straight, once I meet the upcoming deadline for my second book.

I am absolutely in love with Betty by Tiffany McDaniel (W&N). It’s a stunningly written coming-of-age story that deals unflinchingly with the impacts of poverty and intergenerational trauma on the titular Betty, and her family, including her Cherokee father, who is just the most wonderful character. I read it over the course of a weekend this past summer, and at one point I was crying so hard, I had to go for a walk to pull myself together. I’m in awe of McDaniel’s talent—she reminds me of Alice Walker in the way she can make the brutal somehow beautiful. Betty is hands down my favourite book of the past year, and I can’t recommend it enough.