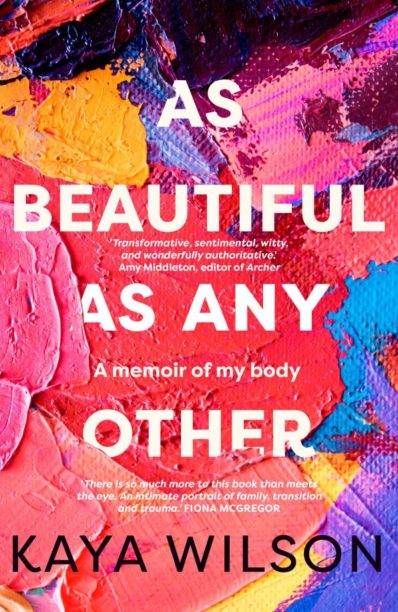 As Beautiful As Any Other
Kaya Wilson
Picador
Reviewed by Marie Matteson
Released May 2021
Trade paperback
ISBN 9781760984885
RRP $34.99
Category: Nonfiction

As Beautiful As Any Other (Kaya Wilson, Picador)

As Beautiful As Any Other is a joyous and thoughtful memoir–travelogue covering the terrains of both the body and the environment. Kaya Wilson’s voice makes the reader feel immediately at home as he, a tsunami scientist and trans man, interweaves the visceral experiences of travel, growing up, trauma and transformation. Wilson grew up between countries, his parents teachers in international schools. This movement—from England, to Aruba, to Tanzania, to Indonesia and back—is echoed wonderfully in the narrative drive of the memoir. Language, thought and impression are grounded in the quotidian observations of life spent with family and between homes. We stop over in places both comfortable and uncomfortable as Kaya maps his transition, as he finds comfort in the body’s becoming and feels grief for the unravelling of the world. Mapping his growing realisation of his gender identity against an account of the rising greenhouse gas emissions destroying our world, Wilson speaks to the chaos that we have all lived with for years, in some form or another. As a tsunami expert, he writes with scientific precision of the water that employs him, traumatises him, frees him and cradles him. This book joins a wonderful growing vein of queer, reflective, literary and immediately relatable memoirs of the person, and the person in place, such as the work of Carmen Maria Machado, Maggie Nelson and Rick Morton.

Freelance reviewer Marie Matteson has worked as a bookseller at Readings for the past 13 years.