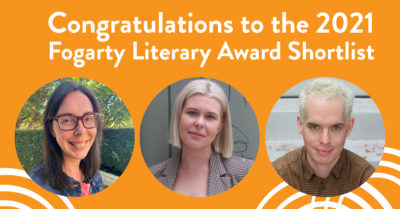 Fremantle Press has announced the shortlist for the $20,000 Fogarty Literary Award for an unpublished manuscript.

According to Fremantle Press publisher Georgia Richter, ‘each of the shortlisted manuscripts had a singular story to tell and delivered it in a compelling and confident way’.

‘Georgia Tree’s memoir of her father, “Old Boy”, is told in the first person with an immediacy that makes the reader feel they are sharing the room with a man who has borne some hard knocks on his way to redemption. The exuberance of Patrick Marlborough’s many characters can scarcely be contained within the pages of “A Horse Held at Gunpoint”—amidst the humour and chaos is a novel with a sweet heart. Brooke Dunnell’s novel “The Glass House” is full of surprises. This novel begins with the failing health of an elderly father and the failing marriage of Julia, his daughter, but turns into an exploration of childhood bullying and the ways in which one woman can remake her own future once she begins to understand the meaning of her past.’

Richter said the judges also made the decision this year to highly commend a further five writers ‘whose work shows great promise’. ‘These were manuscripts that were championed by individuals on the judging panel. Ultimately though, all judges agreed on the final shortlist.’

The biennial prize, now in its second year, is awarded to an unpublished manuscript by a Western Australian author aged between 18 and 35 for a work of fiction, narrative nonfiction or young adult fiction. The winner receives a cash prize of $20,000 and a publishing contract with Fremantle Press.

The prize is a partnership between the publisher and social purpose organisation the Fogarty Foundation, which provides educational and leadership opportunities for young people in WA. The winner of the inaugural Fogarty Literary Award was Rebecca Higgie for her YA novel The History of Mischief, which was published by Fremantle Press in 2020.

The winner of the 2021 award will be announced as part of the next Fremantle Press Great Big Book Read at Edith Cowan University’s Spiegeltent, on Wednesday 2 June 2021.