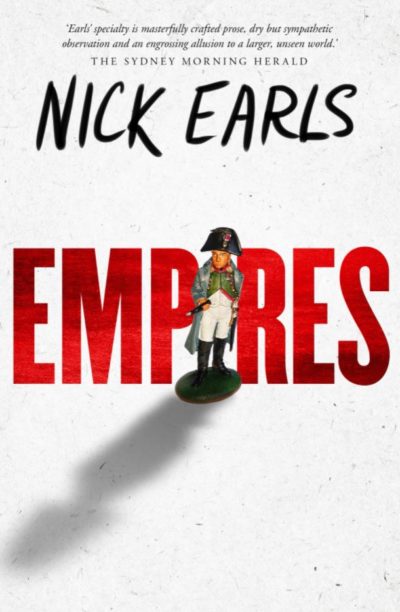 With his latest novel, Nick Earls again proves his talent for compelling and convincing storytelling. A novel in five parts, Empires tracks backwards through history from 2018 to 1809 before returning to the present. It explores the tenuous but tenacious connections between the lives that people live and the objects they acquire throughout those lives. Empires is framed by the tale of two estranged brothers both faced with reinventing their lives after tragedy and illness interrupt their plans. Between these bookends stand three stories with definite, though sometimes oblique, connections to the brothers’ narrative. These stories concern the brothers’ experience as expat Australians in 1970s London, the escapades of a United States senator on a secret mission to Russia just before the 1917 revolution, and the tribulations of a young Irish musician working for Franz Joseph Haydn in the early years of the 19th century while trying to survive Napoleon’s capture of Vienna. What may be fascinating introductions to these historical periods for some readers will be just as enjoyable for readers familiar with those times, presenting as they do delightfully idiosyncratic perspectives on the grand sweep of history. One of the pleasures of Empires is the subtle treasure hunt that Earls sets before his audience, seeding each section with certain recurring objects, elaborating on these objects’ own histories. The astute reader might identify all of these objects on first reading, but there is also pleasure for those who reread this book to trace these objects’ paths through the lives of Empire’s protagonists. Fans of Earls’s previous work will enjoy this addition to his oeuvre, as will those who enjoy meandering explorations of history, as exemplified in books such as Maria Popova’s Figuring. Empires will also appeal to those who enjoy elaborate interlaced narratives, such as David Mitchell’s Cloud Atlas and Italo Calvino’s If on a Winter’s Night a Traveller.