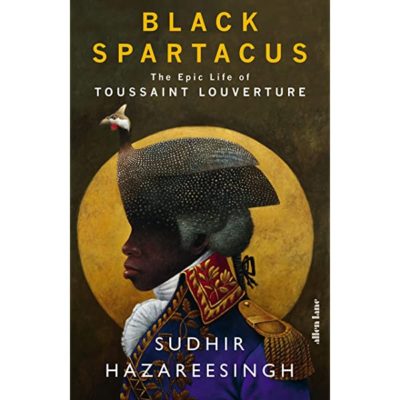 In the UK, Sudhir Hazareesingh has won the £40,000 (A$73,045) Wolfson History Prize for Black Spartacus: The epic life of Toussaint Louverture (Allen Lane), reports the Bookseller.

Black Spartacus is ‘an intimate study of the life’ of Haitian revolutionary Toussaint Louverture, which ‘creates the portrait of a former slave who confronted some of the dominant forces of the age: slavery, settler colonialism, imperialism and racial hierarchy’, the prize organisers said.

‘Black Spartacus vividly recreates the extraordinary career of the leader and hero of the Haitian Revolution, which reverberated far beyond that island and far beyond the Caribbean,’ Wolfson History Prize judging panel chair David Cannadine said. ‘This is an erudite and elegant biography with a message that resonates strongly in our own time.’

Hazareesingh’s book was chosen as the winner from a shortlist of six announced last month. The annual award is run by independent charity the Wolfson Foundation, which awards grants in the fields of science, health, education and the arts and humanities. Last year’s prize was won by David Abulafia for The Boundless Sea (Allen Lane).