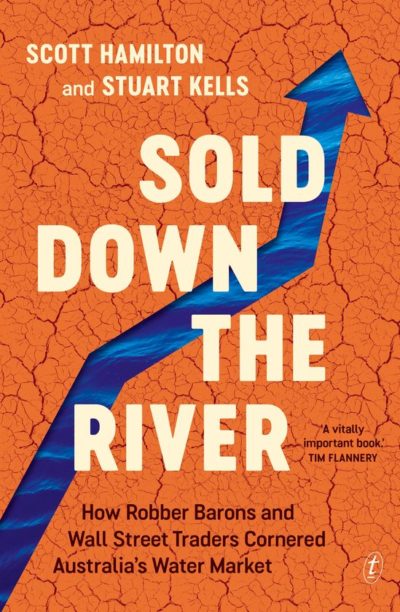 Once upon a time, Australian farmers traded thousands of megalitres of water for something as simple as a slab of beer. Then the economic mood changed. The 1980s brought political leaders such as Margaret Thatcher and Ronald Reagan, spruiking the invisible hand of the free market. By the early 2000s, Australian water was transformed into an aggressively traded financial product. In Sold Down the River, authors Scott Hamilton and Stuart Kells outline in straightforward, accessible detail the story behind this little-known aspect of Australian history. Early water policy in Australia, influenced by the work of Alfred Deakin, deemed that water should not be monopolised or exploited by individuals. Water was to be allocated fairly through bureaucratic systems. This consensus changed in 2004 with the National Water Initiative, allowing water to be traded separately from land. Enter the sophisticated traders of the financial markets, with their fast computers, superior knowledge and market manipulation. By 2018, the Register of Foreign Ownership of Water Entitlements showed that 10 percent of all water assets were held by foreign entities. The great tragedy of this ‘hydrological casino’ is that Australian farmers don’t have a hope of competing in such an asymmetrical market. Opening the trade in water was supposed to make its allocation more efficient, but as Hamilton and Kells show, it has created a whole host of perverse outcomes. With its mix of anger and urgency, this book is essential reading on an arcane subject that Australians should know more about.

Chris Saliba is the co-owner of North Melbourne Books and a freelance reviewer.