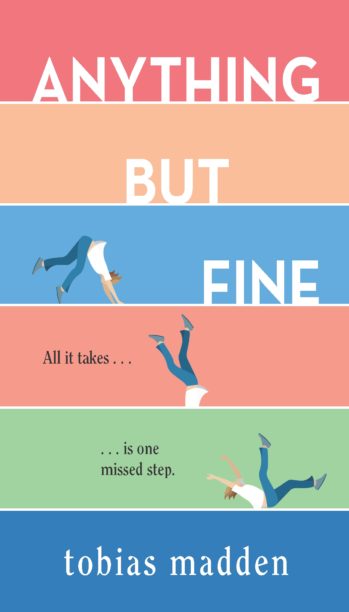 Anything But Fine (Tobias Madden, Penguin)

Anything But Fine is the young adult debut of Tobias Madden, who works in publishing and is part of the #LoveOzYA community. Like his main character, Luca, Madden grew up in Ballarat and was a professional dancer, which possibly contributes to his novel’s feeling of authenticity and honesty. Luca is a talented and focused dancer, just about to audition for the Australian Ballet School when he falls down the stairs and irreparably damages his foot. With his future in ballet gone, so is his scholarship at a prestigious school and his connection to his childhood friends. Suddenly Luca finds himself injured and alone in public school, feeling like he’s hit rock bottom. But there he meets the sweet and enthusiastic Amina and the gorgeous school captain Jordan, who may or may not be straight. Full of texts, group chats and social media, Anything But Fine is grounded in a contemporary world. The ‘teenage’ tone is occasionally overdone but the characters’ complexity and longing are relatable and ring true. There are sexual scenes and some alcohol consumption, although nothing is depicted too graphically, so the book is best for teenagers 13 and over. Anything But Fine is a heartwarming story about a young man finding himself. With its diverse cast of characters, the novel touches on racism, faith, homophobia and peer pressure, but is ultimately about growing and learning to be a better friend, embracing all parts of life and being true to yourself.